More than 500 luminaries in the entertainment, medical science, technology and business sectors gathered for the second annual Rebels With a Cause event on March 20, resulting in the largest total funds raised to date at one event for the life-saving cancer research of David Agus, director of the USC Westside Cancer Center and the USC Center for Applied Molecular Medicine, part of the Keck School of Medicine of USC.

Although he was at the event to be honored and support the cause, it was Larry Ellison, CEO and co-founder of Oracle, who at the end of his acceptance speech, announced a commitment to match the evening’s fundraising efforts of $4.5 million for a total of $9 million.

“Tonight’s announcement from Larry Ellison was a truly moving moment,” said Carmen A. Puliafito, dean of the Keck School and the man instrumental in bringing Agus to USC.

“Larry believed in Dr. Agus’ work from the beginning when his Ellison Medical Foundation announced funding for the initiation of our cancer research at the USC Center for Applied Molecular Medicine,” Puliafito added. “The generosity of this evening’s guests — the Hollywood A-listers, entertainment and technology industry executives and business leaders — as well as the visionary champions we have in Larry and Brad Grey will continue to ensure cancer patients today and in the future have hope for better outcomes and improved survival rates at USC.” 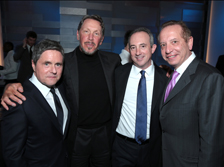 Brad Grey, Larry Ellison, David Agus and Keck School Dean Carmen A. Puliafito, from left, at the Rebels With a Cause event

The event was co-hosted for the second year by Paramount Pictures Chairman and CEO Grey and his wife, Cassandra, along with Puliafito, who joined co-presenting sponsors for the evening, Lynne and Marc Benioff, founder, chairman and CEO of salesforcecom.

Stage 31 at Paramount was turned into a serene white set for the evening’s event emceed by talk show host Jimmy Kimmel and featuring a performance by singer-songwriter Pharrell Williams, who performed his Academy Award-nominated tune, “Happy,” to open the event.

Grammy, Tony and Emmy Award-winning singer Barry Manilow had the crowd on its feet, performing several of his hits such as “I Made It Through the Rain,” “Copacabana” and ending with “One Voice,” performed with 62 members of the USC Thornton School of Music Choir, all organized by musician David Foster.

In one of the evening’s poignant moments, actors Jonah Hill and Anna Kendrick read aloud the life-changing letters of Agus patients such as Robin Quivers, co-host of Howard Stern’s radio show.

“I first met David Agus through [media magnate] Sumner Redstone and as I’ve gotten to know David through the years, I’ve become a huge admirer,” Grey said. “It’s extraordinary work he’s doing. When you see how horrible cancer is, you want to do everything you can to put personalized medicine on the map and to really go after genomic testing and gene sequencing and go after everything we can tackle. That is what David and USC do better than anyone.”

Added Agus: “Both Larry and Brad have been champions for the breakthroughs our research is doing to find better ways to manage cancer patient treatments. Philanthropy is allowing us to think outside of the box — to do things differently to fight cancer, to take the risks needed — to treat the millions of people worldwide impacted by cancer.”

Agus believes each cancer patient needs to be treated according to his and her own molecular makeup — there is no “one size fits all” approach to fighting cancer.

“USC is a leader in bringing together different disciplines in research to find cures and solutions quicker to benefit patients with cancer,” Agus said. “Our center brings together a multidisciplinary team of cancer biologists, molecular biologists, computer scientists, physicists, engineering experts and mathematicians to push the envelope further.

“We get to continue the fight because of the overwhelming support of visionaries such as Larry and Brad,” he continued. “Without the generosity of those who attended the event, cancer wins, and we can’t let that happen.”

As one of the world’s wealthiest men, Ellison is also one of the most generous. He was being honored at the event as one of the first champions of Agus’ research having provided the initial funding for the USC center in 2009.

Agus told the audience it was at a time when funding was scarce for medical research, and his years of pursuing better treatments for cancer patients through proteomic technology was at risk.

Ellison provided the funding Agus needed to keep going as he found a new home at the Keck School.

“I first met David in 2006 when my dear relative was diagnosed with cancer and given little hope for survival,” Ellison told the crowd as he took the stage to be honored. “I reached out to Dr. Agus, and today that close relative is still alive because of the innovative oncology treatment David provided.”

Ellison became a believer and has dedicated significant funding since 2009 to continue the pioneering research Agus is leading at USC.

Rebels With a Cause was part of the Keck Medicine Initiative and the Campaign for the University of Southern California.

USC has announced an expansion of cancer care facilities made possible by a $15 million donation from the Kenneth T. and Eileen L. Norris Foundation.

Rebels With a Cause set fundraising record for cancer research