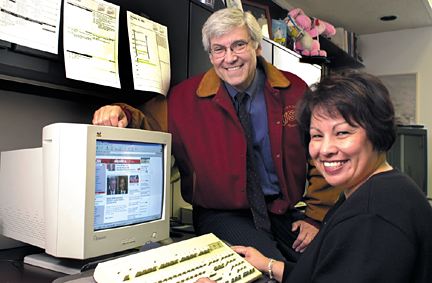 Geoffrey Cowan, dean of the USC Annenberg School for Communication, is the principal investigator on a project that will examine how to improve federal campaign finance disclosure. Rebecca Avila will manage Annenberg’s participation in the project. The pair are checking out a CNN election Web site.

Geoffrey Cowan, dean of USC’s Annenberg School for Communication, will be the principal investigator on an $867,000 project that will examine how to improve federal campaign finance disclosure.

Cowan led a blue ribbon panel that in 1960 proposed a comprehensive campaign finance and ethics program for the city of Los Angeles. That experience, Cowan said, reinforced his interest in the relationship between campaign finance reform and public access to campaign contribution information.

Rebecca Avila, the former executive director of the Los Angeles City Ethics Commission, will manage Annenberg’s participation in the project. She recently joined the Annenberg School as the research associate for the project.

“As part of our data collection, we plan to bring people together from around the country to discuss where the technology is going and who uses the information,” Avila said.

“The project will take advantage of innovations being made at the local level on these issues in a number of different cities and states. How campaign finance disclosure laws intersect with new technology has important implications for the ability of journalists, researchers and the public to access the information in a meaningful way.”

Avila said a number of USC students will work on the project.

“This project benefits from the involvement of several undergraduate and graduate students who are interested in politics and who speak the language of the Internet. Old hands at new technology, they bring a fresh perspective to the issue of campaign finance disclosure.”

Partnering with the Annenberg School in the project are Democracy 21 and Empower.org. Each of the organizations will tackle a different aspect of the debate.

Democracy 21, a nonpartisan, nonprofit organization, will lead the effort to make recommendations for strengthening the enforcement of fed er al campaign finance laws. Empower.org – a sister organization of Empower America – will examine the constitutional issues relating to disclosure of political contributions and consider whether expedited disclosure is a meaningful way to reform campaign finance.

The Philadelphia-based Pew Charitable Trusts support non-profit activities in the areas of culture, education, the environment, health and human services, public policy and religion. In 1998, with about $4.7 billion in assets, the trusts granted more than $213 million to 298 nonprofit organizations.