More than 200 members and supporters of the Trojan League of Los Angeles gathered March 18 on the University Park Campus for the league’s annual benefit and luncheon, which this year showcased the USC Dornsife College of Letters, Arts and Sciences through the theme of “Yesterday, Today and Tomorrow: A Global Perspective.”

“For alumni, the College is a place that we hold dear in our hearts for many reasons,” said association President Mary Rooney. “I will always smile when I look back on my Shakespeare studies with Allan Casson.”

Rooney recalled how those who have earned their degrees from USC Dornsife have had the luxury of studying under accomplished professors, exploring subjects that shaped their minds, hearts and attitudes in significant ways.

After bidding on a wide range of silent auction items, attendees began the event at Town & Gown with a welcome from USC Dornsife Dean Steve A. Kay.

“As I began to think about what I wanted to highlight for you, I decided what I would most like to focus on is our ‘tomorrow,’ our ‘shared future,’ he said. “You see, nothing in academia is as it was.”

Kay went on to highlight the innovating strides USC Dornsife is making in convergent bioscience, practical politics and the digital humanities.

“I believe that USC Dornsife is on the cutting edge of a movement that aims to create the first truly modern university by proving that theory can be directly translated into practice, that research can lead to cures and that collaboration can expand the scope of our capabilities,” he said. 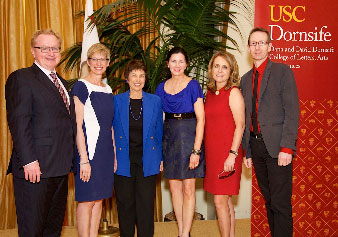 Diane Bleak, the benefit’s co-chair, then invited guests to enjoy breakout sessions with USC Dornsife faculty and staff in Doheny Memorial Library. The sessions included, “Who Will Lead? Global Security Challenges in the Next Decade” with Steve Lamy, vice dean for academic programs and professor of international relations, and David Kang, professor of international relations and business and director of the USC Korean Studies Institute; “Life Underground: The Search for the Intraterrestrials” with Moh El-Naggar, assistant professor of physics; and “Revolutionary Finance: How the Founding Fathers Dealt With Financial Crisis,” with Jacob Soll, professor of history and accounting.

Kori Street, director of education for the USC Shoah Foundation — The Institute for Visual History and Education, demonstrated the institute’s Visual History Archive of nearly 52,000 video testimonies of survivors and witnesses of the Holocaust and other genocides.

Following the breakout sessions, attendees returned to Town & Gown for a luncheon and auction, emceed by Michael Quick, associate vice provost and professor of biological sciences at USC Dornsife.

Elizabeth Garrett, provost and senior vice president for academic affairs, shared remarks on the importance of the residential liberal arts experience, which at USC is anchored by USC Dornsife. She described the critical role of the school as the university strives to be appropriately entrepreneurial while fostering an environment that values the great artists, writers and thinkers of our historical traditions and that builds on a foundation of liberal arts.

“If USC and Dornsife can combine these two strands more effectively than any other institution — of higher education or otherwise — I believe we have the chance to define the future,” Garrett said.

Ann Muscat ’83, the benefit’s keynote speaker, provided an overview of her mission as president and CEO of the Catalina Island Conservancy, one of the largest private land trusts in California. Muscat, who earned her PhD in biological sciences from USC Dornsife, outlined how her education and experience have prepared her to advance the benefits of land stewardship, which protects biodiversity, complements and enhances community assets, promotes health and improves quality of life.

“My graduate career … at USC for my PhD honed an ecological mind that looked for the patterns that connect in nature and tried to think about the world around me holistically,” she said. “Those skills — along with the ability to ask questions, analyze data and think critically — are what have sustained and distinguished me throughout my career.”

The day’s festivities concluded with a live auction of items, including a two-night stay at the USC Wrigley Marine Science Center’s George and MaryLou Boone Center for Science and Environmental Leadership on Catalina Island, as well as the grand prize of a Hawaiian vacation.

The association’s annual benefit is made possible through the support of family, friends and colleagues through donations, attendance and participation. Proceeds from past benefits have enabled the league to contribute more than $900,000 to USC projects, including scholarships, capital improvements and student recruitment.

Tiffany Chum knew the USC Price online Master of Public Administration program was right for her, but she wasn’t expecting to make so many great friendships with professors and her peers.