The popular Los Angeles Times Festival of Books returns to USC on April 12-13. Now in its 19th year, the nation’s largest public literary festival welcomes more than 500 authors, artists and entertainers and 150,000 booklovers to the University Park Campus.

“Inspire Your Fire,” the 2014 festival theme, invites amateurs to get creative with contests in music performance, photography, stand-up comedy, poetry reading and fine art. The submission deadline is April 1; winners will perform during the festival. In addition, a “Favorite Read” sweepstakes will award a $300 bookseller gift card to the winner.

In another first, the April 12 schedule will run late with “Festival After Dark,” an evening of improv, sketch comedy, conversation and music. Festival-goers can attend a live performance of the popular public radio show Wits, with host John Moe, featuring comedian-author-musician Margaret Cho, punk rock band Superchunk and singer-songwriter Will Sheff of the indie-rock group Okkervil River. The ticketed event will take place at 8 p.m. in Bovard Auditorium.

On the eve of the festival, the 34th annual Los Angeles Times Book Prizes will be awarded. In addition to announcing winners in 10 genre categories, the newspaper will honor novelists Susan Straight and John Green with the Kirsch Award for lifetime achievement and the Innovator’s Award, respectively. The ticketed event will take place on April 11 at 7:30 p.m. in  Bovard Auditorium. 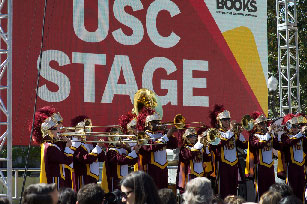 The university will have two dedicated venues spotlighting its own authors, artists and entertainers. Hahn Plaza’s USC Stage will present such Trojan acts as the gospel choir Saved by Grace, R&B band Idesia and South-Asian a cappella group Asli Baat. USC popular music major Catherine Rose Smith, winner of the university’s Festival of Books-inspired songwriting contest, will premiere her original composition, “Learn from You,” on April 12.

‘A true celebration of community and creativity’

Readings and signings by children’s book authors will be ongoing at the USC Civic Engagement booth, and new or gently used books will be collected for distribution to local children through the USC Family of Schools.

“For the fourth year in a row, USC takes great pride in hosting the largest literary festival in the United States,” said USC President C. L. Max Nikias. “It is a true celebration of community, creativity and intellectual curiosity — one that shares the joy of literature and the power of imagination with our local communities.”

The festival will kick off Saturday at 10 a.m. with an opening fanfare by the USC Trojan Marching Band and Trojan Song Girls, followed by a joint welcome from USC Provost Elizabeth Garrett and L.A. Times publisher Eddy Hartenstein. USC popular music major Catherine Rose Smith, winner of the university’s Festival of Books-inspired songwriting contest, will then perform her original composition, “Learn From You.”

Hungry festival-goers can choose from dozens of gourmet food trucks as well as USC’s many cafés, food courts and restaurants. More details about festival programming, public transportation and parking services can be found at festivalofbooks2014.usc.edu

Festival of Books to open second chapter at USC

Bibliophiles throughout the Southland once again will converge on the University Park campus for the annual Los Angeles Times Festival of Books. On April 21-22, the nation’s largest public literary festival will kick off for the second year at USC.

University Professor Kevin Starr was one of the panelists at the Los Angeles Times Festival of Books.

Thousands turn out for Festival of Books, with authors, music, health screenings and a pre-pandemic vibe

The crowds are big as the largest literary and cultural event in the nation returns to the USC University Park Campus after a two-year virtual break.