Researchers from USC and Nanjing University in China have documented evidence suggesting that part of the reason that the Earth has become neither sweltering like Venus nor frigid like Mars lies with a built-in atmospheric carbon dioxide regulator — the geologic cycles that churn up the planet’s rocky surface.

Scientists have long known that “fresh” rock pushed to the surface via mountain formation effectively acts as a kind of sponge, soaking up the greenhouse gas CO2. Left unchecked, however, that process would deplete atmospheric CO2 levels to a point that would plunge the Earth into an eternal winter within a few million years during the formation of large mountain ranges like the Himalayas — which has clearly not happened.

And while volcanoes have been pointed to as a source of carbon dioxide, alone they cannot balance out the excess uptake of carbon dioxide by large mountain ranges. Instead, it turns out that “fresh” rock exposed by uplift also emits carbon through a chemical weathering process, which replenishes the atmospheric carbon dioxide at a comparable rate.

“Our presence on Earth is dependent upon this carbon cycle. This is why life is able to survive,” said Mark Torres, lead author of a study disclosing the findings that appeared in Nature on March 20. Torres, a doctoral fellow at the USC Dornsife College of Letters, Arts and Sciences and a fellow at the Center for Dark Energy Biosphere Investigations (C-DEBI), collaborated with Josh West, professor of Earth sciences at USC Dornsife, and Gaojun Li of Nanjing University.

While human-made atmospheric carbon dioxide increases are currently driving significant changes in the Earth’s climate, the geologic system has kept things balanced for million of years.

“The Earth is a bit like a big, natural recycler,” West said. 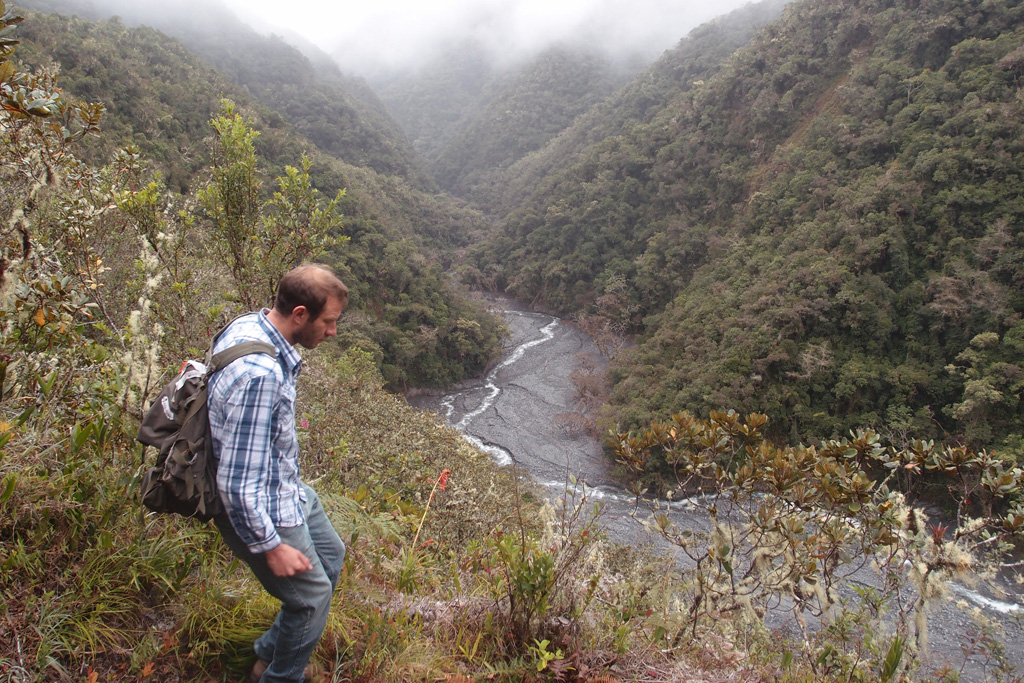 Researcher Josh West treks through a valley in Peru in search of evidence of chemical weathering of rocks as they erode. (Photo/courtesy of Mark Torres)

Torres and West studied rocks taken from the Andes mountain range in Peru and found that weathering processes affecting rocks released far more carbon than previously estimated, which motivated them to consider the global implications of CO2 release during mountain formation.

The researchers noted that rapid erosion in the Andes unearths abundant pyrite — the shiny mineral known as “fool’s gold” because of its deceptive appearance — and its chemical breakdown produces acids that release CO2 from other minerals. These observations motivated them to consider the global implications of CO2 release during mountain formation.

Like many other large mountain ranges, such as the great Himalayas, the Andes began to form during the Cenozoic period, which began about 60 million years ago and happened to coincide with a major perturbation in the cycling of atmospheric carbon dioxide.

Using marine records of the long-term carbon cycle, Torres, West and Li reconstructed the balance between CO2 release and uptake caused by the uplift of large mountain ranges and found that the release of CO2 release by rock weathering may have played a large, but thus far unrecognized, role in regulating the concentration of atmospheric carbon dioxide over the last roughly 60 million years.

Material that cleans carbon dioxide from the air

A team of USC scientists has developed an easy-to-make material that can scrub large amounts of carbon dioxide from the air.

Saving the Planet With Carbon Dioxide

Could CO2 be used to fuel the world’s economies and reverse global warming? Top scientists at a NSF/USC workshop reach for the moon.

USC marine biologist Anthony Michaels contributes to research regarding ‘ocean iron fertilization’ as a strategy to sequester greenhouse gases in the sea.