Buoyed by only a life vest, the young American pilot bounced and bobbed in the cold, dark waters of the Pacific Ocean. Forced to abandon his aircraft earlier that afternoon after it was shot down by Japanese destroyers, it was now the middle of the night. Surrounded by blackness, he was unsure of his exact position. In the distance, occasional flashes from artillery fire lit up the night sky.

Just after sunrise, foamy phosphorescent waves began to bubble up as a destroyer bore down on him. He was so close to the vessel he could make out the American sailors on deck. With his lips affixed to a whistle around his neck, he blew. The men were alerted and plucked him to safety.

It was 1942. The young airman had been wading in Philippine waters smack in the middle of the Battle of Leyte Gulf, now regarded as the largest and most intense naval battle of World War II.

That man’s name may be lost to history, but the story of his heroic survival is captured in Douglas Keeney’s forthcoming book Lost in the Pacific: Epic Firsthand Accounts of WWII Survival Against Impossible Odds. The book, due out in April, recounts 23 narratives of enlisted American men who endured plane crashes, being shot down or having to ditch aircrafts in the Pacific Ocean. A number of men floated for days in open waters before their rescues.

Keeney, who earned a bachelor’s degree in economics from the USC Dornsife College of Letters, Arts and Sciences in 1973 and an MBA from the USC Marshall School of Business in 1976, came upon these true tales of heroism while digging through the archives of the Maxwell Air Force Base’s History Center in Montgomery, Ala.

Scanning through nearly 2,000 feet of microfilm, the historian couldn’t help feeling that each story of survival he encountered — collected in crash reports made by the Army and Navy — embodied the moral fiber of America.

“I felt like I was looking at ground zero for the DNA that courses through every rescuer, every first responder, every man or woman that went up the stairs on Sept. 11 in the World Trade Center,” Keeney said.

Keeney, himself a pilot, is fascinated by World War II history, exemplified by the roster of his works of historical nonfiction. He has authored or co-authored more than a dozen books, which examine D-Day and the Cold War, among other events.

He traces that interest in history to his childhood when he would dig through his grandmother’s attic. Rummaging through boxes, he found plates and glassware wrapped in newspapers chronicling the events of World War II.

“I was captivated by the stories of war,” Keeney said. “I would haul the papers home and put them between books to get the wrinkles out.” 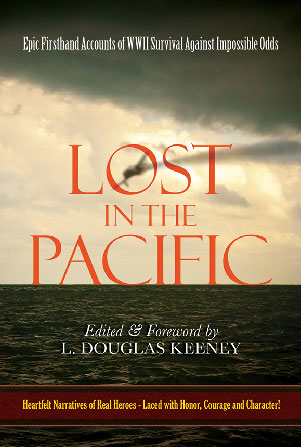 Later, as a USC Dornsife student, he was inspired by trips to the El Toro Marine Corps Air Station near Irvine, Calif., where he and his friends would watch jets land.

“I’ve often thought of that as where I got my interest in aviation history and military histories,” Keeney said.

As an undergraduate, Keeney not only found a lifelong passion for learning, he also found his lifelong partner. On the first day of his freshman year, he was seated alphabetically next to Jill Johnson (comparative literature ’73), and the two were married a year and a half after graduation.

After Keeney earned his MBA, he and Jill, a journalist, moved to New York City. There, Keeney had a successful 16-year career in advertising with the firm Ogilvy & Mather, a job that began with an internship arranged through USC Marshall. From there, he went on to found Douglas Keeney & Co., a publishing and production company that would create content for cable television networks and book packaging for New York publishers. In 1992, he co-founded The Military Channel with two other partners.

He began writing around that time, often visiting archives. The stories that he uncovered would become the basis of his books.

“I will go through an archive wherever I can get into one, whether it’s on an air force base, the USC archives or a national archive in Washington, D.C.,” Keeney said. “It’s a very solitary thing to do, but it’s a happy thing for me.”

He learned about strength and compassion

Keeney credits his liberal arts education at USC Dornsife for preparing him for a career in writing by giving him a broad understanding of the world.

“I took classes in oceanography, philosophy, economics,” Keeney said. “By ranging out into these other fields, I prepared myself for opportunities that I couldn’t have imagined. Having a diverse undergraduate education pays off so beautifully when we get specialized later in our adult life.”

In particular, a light bulb went on in his head when a philosophy course at USC Dornsife introduced him to the writings of humanists Erich Fromm and Viktor Frankl.

“Learning about the value and strength of the human changed everything,” Keeney said. “You can see it in Lost in the Pacific. That’s what resonates in these stories — this very concept that we have compassion for each other and we’ll help each other.

“I say to people that I got it all at USC. I got my education, I got an internship that led to my career and I found my wife there. That’s the trifecta. It doesn’t get any better than that.”

World War II and Its Aftermath Viewed Through Many Lenses

Artist Richelle Gribble is leading the collection of materials that could help future generations understand the impact of this global pandemic. The capsule will be sent to the moon by 2022.

Lindsay Harrison’s work helped to overturn the Trump administration’s dissolution of DACA and aided the legal battle against the order prohibiting international students from remaining in the country.

From starting nonprofits to overcoming personal adversity, Marcus Lo has experienced more at 19 years old than many do in a lifetime. He’s excited to add “being a Trojan” to that list.

Allen, Celia and Charles all received life sentences for crimes they committed as teens and spent 84 years combined in prison. Through their dedication and the project’s advocacy, they are now free.