Filmmaker George Lucas, who has made transformative gifts to the USC School of Cinematic Arts, continued his philanthropy by endowing new faculty chairs named for celebrated pioneers Sergei Eisenstein, George Méliès and Williams Cameron Menzies, whose theories and practices are taught in film programs around the world.

At a dedication event on March 13, professors Bruce Block, Michael Fink and Alex McDowell were installed as the first holders of the Sergei Eisenstein Endowed Chair in Cinematic Design, the George Méliès Endowed Chair in Visual Effects and the William Cameron Menzies Endowed Chair in Production Design, respectively. The total number of endowed positions at the school is currently at 24, more than any other cinematic arts program in the country.

“In the mold of the filmmakers they are named after, these new chairs represent innovation in the cinematic arts,” she said. “Bruce Block, Michael Fink and Alex McDowell have each made singular contributions to their fields. They are doing important work in our industry, while simultaneously preparing the next generation of innovative storytellers.”

At the dedication event, Lucas said he was naming the chairs as a way to say “don’t forget the basics. Don’t get enamored with new technology … it doesn’t change anything. The art of what we do is exactly the same. The goal that we have is exactly the same as George Méliès, Williams Cameron Menzies and Sergei Eisenstein. It’s beyond technology. It’s the art of movies.”

Block has been teaching “Filmic Expression,” a course that Eisenstein originated for more than 35 years. Block’s producing and consulting credits include What Women Want, Something’s Gotta Give, The Holiday, As Good as It Gets, Stuart Little and Father of the Bride and its sequel.

He directs documentaries and animated films for museums, commercials, the IMAX format and NASA simulations. He also conducts seminars in visual structure for Blizzard, Blue Sky, Disney, Dreamworks, ILM, Lucasfilm and Pixar. His book, The Visual Story, has been published in six languages and is used as a reference text by filmmakers around the world. 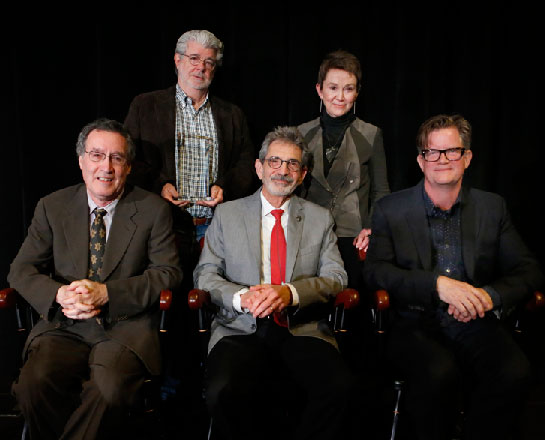 “Eisenstein’s ideas influenced all of Hollywood’s filmmakers, from the montages of Frank Capra’s films to the MGM dance extravaganzas of Busby Berkeley to Disney’s animation,” Block said during a speech at the dedication, noting that Eisenstein lectured at USC. “His teachings became part of our curriculum and were taught here by Slavko Vorkapić, Les Novros, Woody Omens and then by me.”

Fink, who has been creating visual effects for more than 35 years, began his career on The China Syndrome in 1977. His other credits include Star Trek: The Motion Picture, Blade Runner, Batman Returns, The Golden Compass, Avatar and Life of Pi. He was nominated for the Academy Award for best achievement in visual effects for Batman Returns in 1993 and won the Oscar in that category in 2008 for The Golden Compass. Fink is on the executive committee of the visual effects branch of the Academy of Motion Picture Arts and Sciences and is a founding member, board member and current vice chair of the Visual Effects Society.

“I believe this chair is the first endowed chair in visual effects at any university,” he told the crowd gathered in the Ray Stark Theatre. “Naming it after George Méliès, truly the father of all that we do in visual effects today, is not only appropriate, but the least we can do to carry his name forward in our teaching.”

McDowell has more than 30 years’ experience as a narrative designer and is creative director of USC’s World Building Media Lab and the USC 5D Institute, the thought leadership network. His credits as a production designer include Fear and Loathing in Las Vegas, Fight Club, Minority Report, Watchmen and Man of Steel.

He was a visiting scholar at the Media Lab at the Massachusetts Institute of Technology from 2006 to 2011. He serves on the executive board of the Academy of Motion Pictures Arts and Sciences’ designers branch. In 2006, he was named Royal Designer for Industry by the UK’s Royal Society of Arts, and in 2013 he received the Designers & Art Directors President’s Award. He remains a practicing designer, working in multiple media with the company he leads, 5D Global Studio.

“Menzies led a revolution in the visualization, spectacle and immersion of the audience in the medium of film at a time of its last great upheaval — the transition from silent film to sound and color,” McDowell said. “In the process, he single-handedly transformed the craft of art direction into the art of production design and in doing so cemented the central triumvirate of film creation — director, cinematographer and production designer — in the film industry.”

USC alumnus, filmmaker and benefactor George Lucas ’66 was awarded the USC Presidential Medallion, the university’s highest honor, by President Steven B. Sample on April 26 at the annual Academic Honors Convocation.