PhD graduates at the USC Rossier School of Education are finding tenure-track faculty and research positions at an impressive rate, according to a recent analysis.

The school’s PhD program, a doctoral degree in urban education policy, was retooled a decade ago with a focus on enrolling smaller, more highly selective cohorts, with only about 10 percent of the most accomplished applicants being accepted into the program. On average, only 12 to 15 candidates enter the program annually.

This select group of candidates has proven to be highly productive. Seventy percent of the PhD cohorts from 2004 to 2009 completed their degrees within five years, and 50 percent completed them within four years.

As a comparison, the Council of Graduate Schools released a 2008 report on PhD completion rates from 1992 to 2004 and found that 11 percent of the candidates completed their degrees in four years and 23 percent in five years. Across all disciplines, about 57 percent of students who start their PhDs complete them within 10 years, according to the report.

Despite the shrinking supply of tenure-track positions across the nation, two-thirds of USC Rossier’s PhD graduates are placed in tenure-track or postdoctoral positions; another 15 percent work in research units.

University Professor William Tierney, co-director of USC Rossier’s Pullias Center on Higher Education, said these numbers place the school near the top when compared to all schools and colleges of education across the country and all schools within USC.

Among the hallmarks of the PhD program at USC Rossier is that all candidates receive full funding, meaning they do not have to compete for grants or work to support their studies.

At USC Rossier, candidates immediately begin working with advisers on research and grants, they work through their summers and they benefit from the support and resources of a dedicated PhD program office and a doctoral support center. Candidates also collaborate with top faculty across the school, receiving mentorship from education researchers in addition to their own advisers. 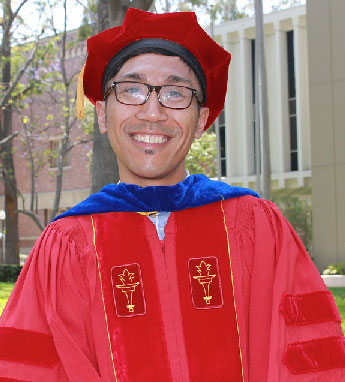 Kris Depedro: “I developed the tools to build a strong scholarly identity.”

According to Kris DePedro PhD ’12, assistant professor at Chapman University, the most unique aspect of his experience was “amazing mentorship.”

“I worked closely with my adviser on several research projects, including writing a multimillion dollar grant and successfully publishing in a top-tier academic journal,” he said. “I also gained the tools of the trade, which is not often taught in other programs.

“In my relationship with my mentor,” he added, “I developed the tools to build a strong scholarly identity — everything from presenting well at national conferences and designing rigorous curriculum for my students.”

“The program also provides very generous support to help graduate students jump-start their own research agendas — the research funds are often comparable to those given to junior faculty members.”

Thiloshon Nagarajah has developed a device that stops plastic debris from flowing through neighborhood drainage systems and polluting the oceans.