A team of archaeologists and students from the USC Dornsife College of Letters, Arts and Sciences recovered the remains of legendary race horse Native Diver on March 8, helping to preserve a part of Los Angeles history.

The black gelding, a member of thoroughbred racing’s Hall of Fame, was the first horse bred in California to win more than $1 million in the 1960s. Over the course of his illustrious racing career, the speedy steed won three consecutive Hollywood Gold Cups and 34 stakes, the highest level of horse races.

Jet black with a white blaze, Native Diver was an amazing animal, according to Richard Shapiro ’74.

“He raced with his head held very high, unlike other horses that lower their head when they’re running,” Shapiro recalled. “In the walking ring before races, there would be crowds of people straining to see him. He would just stop and look at the crowd and then he would walk on.

“He knew he was a star, he absolutely knew it.”

“I thought to myself, this would be a great project for archaeology students,” said Shapiro, who earned his bachelor’s in political science from USC Dornsife. Shapiro’s brother Thomas, sister Peggy and father Marvin also attended USC.

‘The preservation was incredible’

“We laid out two rectangular excavation units and began to define the horse’s skeleton,” Garrison explained. “Working out from the rib cage, we were able to find the pelvis and hindquarters and then later the forelimbs. The preservation of the bone was incredible, and it was great for the students to be able to unearth a complete skeleton.”

Dodd and Garrison have extensive experience directing archaeology projects in Turkey and Guatemala, respectively. They were joined by zooarchaeologist Sarah Newman of Brown University, who provided expertise in horse anatomy. Researchers Curt Schurgers and Albert Lin from the University of California, San Diego, also helped to document the excavation, using a low-altitude balloon with a camera to generate a 3-D model of the excavation.

USC Dornsife students from Garrison’s courses “Scientific Analysis in Archaeology” and “Human Impacts on Ancient Environments” and Dodd’s course “Religions of Ancient Egypt and the Near East” participated in the exhumation, as well as students with experience excavating in the field with Dodd, Garrison and other USC Dornsife faculty members.

Senior Grant Dixon, an interdisciplinary archaeology and religion major, was eager to help excavate a complete skeleton. To date, he has taken part in archaeological digs in Italy and in areas of Southern California. Usually, he investigates ancient civilizations and incomplete remains.

“As an archaeologist I typically excavate cultural remains such as pottery sherds and other types of artifacts,” Dixon said. “This project allowed me to gain experience in excavating a complete skeleton, which uses specific techniques that are different from other types of excavations.”

Because of the time period he usually studies, it is rare for him to have the chance to communicate with people involved in his areas of interest.

“I had the wonderful opportunity to get to know Mr. Shapiro, the grandson of the horse’s owner, and build a connection to him and to Native Diver,” Dixon said.

As a local racing legend, Native Diver’s exhumation garnered the attention of the media, with reporters from the Los Angeles Times, CBS News and other outlets interviewing the exhumation team at the dig site.

“We were thrilled to have a local teaching opportunity and to provide a service to the Southern California horse racing community,” Garrison said. “It was really impressed upon us that Native Diver was ‘the people’s horse’ and certainly, the attention this project has garnered proves how important Native Diver really was.”

Senior Alex Williams, who majors in archaeology and anthropology, said the experience was a meaningful addition to her education.

“Hands-on learning and field work are important for our major,” Williams said. “This is what we study in the classroom, so to be able to do it in the field is incredibly fun and rewarding.” 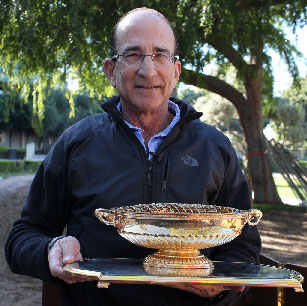 Prior to commencing the dig, Shapiro shared memorabilia from Native Diver’s heyday with the excavation team.

“Students got to see the first Gold Cup that Native Diver won, his halter and many photographs of his wins, races and celebrities,” said Dodd, who is also curator of USC’s Archaeology Research Center.

“Richard told the students about his personal history with Native Diver so they had a clear understanding of what they were doing and why it was significant both to other members of the Trojan Family and to Los Angeles history.”

The event resonated with Dixon, who hopes that the team’s efforts to recover Native Diver will inspire more people to learn about the horse and his place in L.A. history.

“I was so honored to be able to participate in the recovery of an animal that was a celebrity in his own right,” Dixon said. “Hollywood Park was the place to be in the middle of the 20th century, and Native Diver played a significant role in the popularity of horse racing during that period.”

Native Diver’s remains will be shipped to the Del Mar racetrack, where they will be laid to rest. While a new burial site is prepared, USC will house the remains, which are stored in special protective materials.

“We may engage students in the cleaning of Native Diver’s skeleton as he awaits reburial,” Garrison said. “This will continue to provide us with teaching opportunities regarding artifact handling and processing methods.”

Shapiro noted that a new monument will be constructed at Del Mar, and an unveiling ceremony will take place, most likely at the beginning of the next racing season.

He said he was grateful for the help USC provided in recovering Native Diver, an important part of his family’s history.

“It was amazing,” Shapiro said. “I don’t think I had an appreciation for the care and the process and the dedication of what was involved in doing something like this. I was honored to have USC professors and students participating in it. Now they become part of the history of Native Diver. They become part of the story.”