For nearly 90 years, Los Angeles’ architecture has been seized upon by the city’s critics as an easy target — a way to reinforce its reputation as a shallow place without roots. Unjustly so, according to David Ulin of the USC Dornsife College of Letters, Arts and Sciences.

“I think that is a misperception because the diversity of Los Angeles and in some sense even the silliness of some of the architecture — the fairy tale houses, the chateaux — which Nathanael West makes fun of in the opening pages of Day of the Locust — is a symbol of the city’s fundamental democratic impulse,” said Ulin, lecturer in the Master of Professional Writing (MPW) program and book editor at the Los Angeles Times.

“This diversity is a key to the city’s personality, both literary and otherwise,” he said, speaking at a panel discussion on the subject of L.A. architecture as part of “Tales From Two Cities: Writing From California,” a two-part series separated by four months and 400 miles.

The local event, held at the Los Angeles Public Library Feb. 20-22, included panels, readings, discussions and a bus tour about the literature of Southern California. A similar event was held in October at the San Francisco Public Library.

“The major idea was to take the pulse of the literary identity and literary themes that help to define California, both historically and in contemporary settings or writing,” said William Deverell, professor and chair of the history department at USC Dornsife and director of the Huntington-USC Institute on California and the West.

Deverell organized the two events with Ulin, in partnership with the major public libraries of each metropolitan region, and with the support of Margaret and Will Hearst.

The events explored literary expression in Northern and Southern California.

“We wanted to highlight different themes, writers and histories,” Deverell said. “At the same time, we suggest similarities or a combined California thrust to literary production in the far West.”

Titled “Architecture, Identity and the City of Angels,” the discussion moderated by Ulin featured panelists Alice Kimm, chair of undergraduate studies at the USC School of Architecture and a principal at John Friedman Alice Kimm Architects; Christopher Hawthorne, architecture critic at the Los Angeles Times; and Jon Christensen, editor of Boom: A Journal of California and a professor at UCLA. 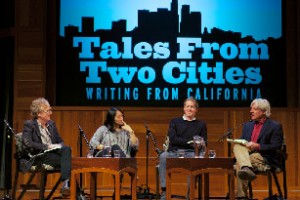 Ulin kicked off the discussion by reading extracts about L.A. by Stewart Edward White, Truman Capote and Norman Mailer. He used these literary passages to launch a broader conversation about how descriptions of the physical landscape, the architecture and design affect our perceptions of the city.

“There is something about the city of Los Angeles as a creative environment in which innovation can happen,” said Kimm, who described her shock upon encountering so-called “cardboard architecture” evident in certain parts of the city when she arrived in L.A., fresh out of graduate school on the East Coast. She said her view of L.A. has evolved as she has lived and worked in the city.

“There is the idea that you come to L.A. as an outsider, as many of us do, and are able to throw off the fetters of tradition and all of the preconceptions that you have about anything, really, and make your own way,” she said. “And while that gives rise to the kind of eclecticism that many people don’t relate to, it also gives rise to the freedom to invent and create.”

Another writer featured at the L.A. event was crime novelist Walter Mosley, who talked about race, noir and writing in and about Los Angeles. USC Dornsife’s Brighde Mullins, MPW director and an award-winning playwright and poet, led a conversation with Lisa See, Naomi Hirahara, Lynell George and Hector Tobar, about how ideas of nativity, naturalization and exile inform contemporary writers.

The program also featured four “interludes,” or open-mike sessions, titled “L.A. Stories.” Historian Sam Watters spoke about Gertrude Stein, the indomitable American writer, art critic and mentor of Ernest Hemingway, and her 1934 trip to Hollywood, during which she discussed the future of cinema with Charlie Chaplin; beat generation icon Gary Snyder spoke about his poetry; David Kipen discussed the works of Thomas Pynchon; Deverell talked about Carey McWilliams and Ulin about Joan Didion.

“Noir on the Road: Raymond Chandler’s L.A.” featured the insights of Chandler experts Judith Freeman, MPW lecturer and author of The Long Embrace: Raymond Chandler and the Women He Loved (Vintage, 2008), and British-born author Richard Rayner, as they led a guided bus tour through downtown L.A. and Hollywood to Chandler’s haunts and the buildings which inspired the settings of his seven celebrated literary detective novels featuring private eye Phillip Marlowe.

Participants were able to see the neo-classical — and now abandoned — Bank of Italy building downtown where Chandler worked as an oil executive in the 1920s. Nearby, the 12-story Oviatt Building, the first Art Deco high-rise in L.A., served as the model for the Treloar Building featured in the opening passage from Chandler’s 1943 novel The Lady in the Lake. During a Friday evening reception following the first full day of the conference, the writers and their guests wandered around James Oviatt’s well-preserved Art Deco penthouse apartment — with Chinatown playing on a rooftop screen.

The tour also included stops at the late-Victorian Doheny Mansion near the University Park Campus, the Chateau Elysée in Hollywood, built in 1929 as a luxury apartment complex, and the historic Mayfair Hotel where the alcoholic writer holed up during a split from his beloved wife, Cissy, and threatened to commit suicide by jumping from an upper-floor window. 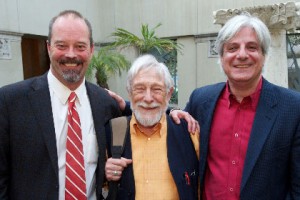 Deverell said the events in both cities helped illuminate not only the regional histories of literary production but also brought younger writers and their work to the foreground.

“It’s exciting for us to work with these dynamic writers and these equally dynamic public libraries — we can think about writers, writing and literature, and work with the very publics which the writers are attempting to reach,” he said.

“For a very, very long time, writers have been challenged by figuring out and speaking for California, in fiction and nonfiction. The place is full of puzzles and mysteries, and oftentimes it seems as if the poets, novelists and short story writers come alongside truth as powerfully as the historians. That’s part of the fun, and certainly the intellectual excitement, of events such as these.”

Deverell said California is special, just as people can think of any place as special.

“What intrigues me most as an historian is that we sometimes discover entirely new ways to think about our state, and our places within it, through the turn of a page or a phrase.”

Michele Harper shared stories of compassion from her book, The Beauty in Breaking: A Memoir.