Pavitra Krishnamani was only 16 when she entered USC through the Resident Honors Program, she quickly became involved.

As she put it, “I think, in a way, I’ve helped build a curriculum for myself at USC, through extracurricular activities that have helped me learn about other people, as well my major.”

Although those activities cover a wide range — from tutoring community students to founding a dance team to editing health publications — it’s all coming together as the progressive degree student completes a Bachelor of Arts in psychology from the USC Dornsife College of Letters, Arts and Sciences and a Master of Science in global medicine from the Keck School of Medicine of USC. She plans on attending medical school in the fall and is considering pursuing child psychiatry.

Growing up in homogenous suburban towns in Delaware and Pennsylvania, Krishnamani wanted to understand culture from a psychological point of view when she came to the cosmopolitan Los Angeles area.

“When I came here, one of the things I was very focused on was culture,” Krishnamani said. “I got involved with USC’s Hindu Student Organization and Student Interfaith Council to apply what I learned in psychology classes to understand people who bring different cultural perspectives to the table.”

Although she is no longer a dancer with the group, she was a founding member of the Bharatanatyam Dance Team because it helped her “keep in touch with the heritage that had been passed along by my parents.”

Krishnamani also quickly became involved in the community surrounding USC through a Joint Educational Project tutoring program. She was able to apply her classroom experience in medicine to tutoring elementary students on health topics.

This led Krishnamani to seek a program where she could also mentor teenagers. She found it as one of the first student tutors for the Department of Public Safety’s Cadet Program, which teaches young men and women about law enforcement and emergency services. 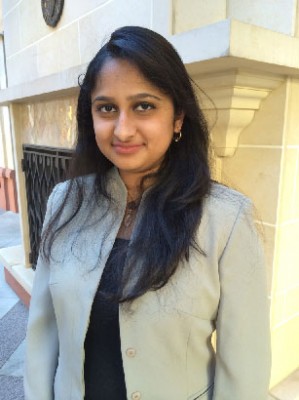 Using her background in psychology, Krishnamani realized the key to helping these students succeed academically came from taking their personal circumstances into account.

“I think it became a lot more about forming connections than simply instructing,” she said. “As I learned more about the students’ personal lives, I really got to know them in more than just an academic capacity.”

After three years of service, she serves as the program’s adviser for academic affairs, a role that includes holding mini-conferences on college planning.

Krishnamani credits her Cadet Program work with gaining perspectives she’ll put into use when she represents USC as a member of its team at the Hult Prize competition in San Francisco.

Each year, teams from the world’s universities compete to create a workable business solution to a global problem and win a million dollars to make it happen. This year’s challenge is “solving noncommunicable disease in the urban slum,” and Krishnamani thinks the “flexibility in looking at different people’s outlooks that working with DPS has given me will be very helpful.”

She’s also a member of the winning team in USC’s Global Health Case Competition and will be heading to the international case competition at Emory University this spring.

Krishnamani’s interest in global medicine propelled her to find the time to do medical writing and editing as the associate editor for USCience Review, an online science blog, and as senior editor for Trojan Health Connection.

Her experiences both in and outside of the classroom have inspired Krishnamani to attend medical school and consider becoming a child psychiatrist.

“Although many of the kids believe I have inspired them,” she explained, “I don’t think they realize exactly how greatly they have inspired me.”

It may be a good choice for those who are set on USC and like to get a jump on things. For others, the standard process remains the way to go.