Smartly clad in a sleeveless dress accented by gold jewelry and patent leather heels, Julia McGinnis gazed at a mound of waste 200-feet wide as it was smashed down by giant, roaming bulldozers.

She may have looked like someone gave her woefully wrong directions to the afternoon board meeting. But despite the smell of decomposing garbage, McGinnis was right at home.

“I see energy,” she said, looking around her. “I see money.”

McGinnis loves a little trash talk. The USC Dornsife College of Letters, Arts and Sciences alumna works at Orange County Waste & Recycling, headquartered in Santa Ana, Calif., where she oversees legislative and regulatory affairs, public information and renewable energy. While visiting the Olinda Alpha Landfill in Brea, Calif., and downplaying the aroma, she noted that the facility moves trash and covers it so quickly that the odor is far milder than at most landfills.

She has reason to be proud. The landfill is the country’s third-largest gas-to-energy project, which generates about 37.5 megawatts of electricity and millions of dollars annually.

“We’re harvesting the landfill gas and we’re making electricity with it,” McGinnis said of Olinda Alpha Landfill, among 86 facilities in the United States converting trash gas into energy. “We receive some of the money. So, by being sustainable and proactive, we can keep our refuse rates to the general public low.”

McGinnis and Don Ries, Orange County’s program manager for renewable energy, enthusiastically described how the bulldozers crush 6,000 tons of trash per day before workers cover the refuse with dirt. Each evening, all open piles of trash are blanketed in soil or tarps. In some areas the garbage is 300 feet deep. What was once a canyon next to Chino Hills State Park is slowly filling. And while trash rots in landfills, it creates methane gas.

McGinnis will tell you methane is an extremely powerful greenhouse gas. One pound of methane traps 25 times more heat into the atmosphere than a pound of carbon dioxide. Methane is also the major ingredient in natural gas.

But when methane is trapped in landfills, it can be captured and used to produce electricity or heat buildings. Launched in the early 1980s, the technology turning trash into energy is being used at the Olinda Alpha Landfill to power 26,000 homes in nearby Anaheim. Each evening, more than a foot of dirt covers the newest garbage. It takes about a year to start emitting usable methane.

McGinnis and her colleague pointed out wide, long pipes snaking along the dirt. After the refuse decomposes and methane gas rises to the top of the landfill, it is collected in these perforated pipes. The pipes wind their way to a nearby processing plant, where the methane is burned to produce heat or generate electricity.

Capturing methane before it gets into the atmosphere also helps reduce the effects of climate change. Over two decades, the plant is expected to reduce emissions equivalent to burning 144,000 railcars worth of coal, McGinnis said.

Opponents of trash gas-to-energy claim the effort takes attention and urgency away from recycling and composting. But the U.S. Environmental Protection Agency has lauded the project for using a local source to generate energy while protecting the atmosphere and strengthening the economy.

Still, trash can be a hard sell. On a hill overlooking the $130 million plant — mostly paid for with federal funds — McGinnis tilted her head toward a large white plume emanating from a chimney.

“That is not smoke, that’s steam,” she said. “The public looks at that and sometimes assumes it’s proof we are contaminating the atmosphere. We’re not. But that’s part of my job — to help educate the public.”

The road to refuse

She couldn’t envision herself in court arguing cases. Wanting to be part of the decision-making process on policy, she earned her master’s degree in public administration from the USC Price School of Public Policy in 2006.

Raised by a single mother in the military, McGinnis has always been drawn to the public sector. As a girl, her family lived on the Travis Air Force Base. When her mother, Patricia Henry, retired and took a job with the state, the family moved 44 miles east to Sacramento, Calif.

Ambition is part of her nature. In high school, she was an advanced student already taking community college courses.

“I’m probably overly ambitious,” she said. “But it was all internal. My mother set the bar, but then she stepped back and said, ‘I trust you.’ I would come home with a B-plus and be devastated. She would say, ‘For crying out loud, ease up on yourself.’ ”

McGinnis learned about USC during a higher education event at her high school.

“No one in my family had gone to college so I didn’t really know anything about schools,” she recalled. “I knew about CSUS [California State University, Sacramento] and about Harvard only because I had book covers that said ‘Harvard.’ But that was it.”

When recruiters from USC started speaking with her, she began with, “You’ll have to forgive me, but I’ve never heard of USC.” McGinnis was impressed with what she heard.

“So I started researching USC on my own and told my mother, ‘This is a great school, it’s where I want to go.’ ”

While McGinnis pursued higher education, Henry returned to school to earn her bachelor’s and master’s degrees in social work at CSUS.

“I really took to academia,” McGinnis said. “I have a fascination with learning and creating an expertise in an area. Whether it’s water management, homeland security and counterterrorism or waste management. I used to take it for granted that everyone’s intrinsically motivated. But not everyone is.”

The examples she threw out were not arbitrary. She has held high-powered jobs in all of those fields. After graduation, McGinnis was offered a position at the U.S. Department of the Interior’s Bureau of Reclamation. At 25, she became chief of the bureau’s Enterprise Program Management Office, among the Department of the Interior’s youngest managers.

“I just applied,” she said of landing the job. “Everyone thought I had some sort of connection because it was really unheard of to bring in someone to the program at a managerial level who was a complete outsider.”

It helped, she said, that the person who became her supervisor had completed an overseas program at USC.

“We had something in common,” she said. “Having USC as my backing spoke volumes.”

At the Department of the Interior, she oversaw California’s Central Valley Project, one of the nation’s biggest water conservation developments.

“I had never worked with water before,” she said. “I found my groove in that position.”

She has a ‘heart for people’

With a background in strategic planning, she implemented changes in operations and accounting for the bureau, which manages the country’s water supply through reservoirs, canals, dams and power plants.

Her implementations are credited with saving the bureau more than $10 million.

Working with high-level government energy officials and political leaders, she addressed issues surrounding drought, climate change and population growth. She became an expert in water shortage and management — among the state’s most pressing issues.

The bureau was McGinnis’ first career stop dealing with the environment. When it comes to a cause, she usually can be found volunteering to help those in need. She spent part of a recent summer aiding earthquake victims in Haiti.

“I’ve always had a heart for people,” she said.

“I believe in recycling and being a good steward of our resources,” she said. “So that’s always been kind of a tickler in the back of my mind. My family’s also Native American, so I think that stewardship of nature has been an underlying strand in my life. But I never thought of it as a career path.” 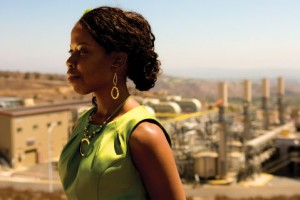 Yet when she left the bureau for a position at the U.S. Department of Homeland Security, she missed pursuing an environmental cause. The Transportation Security Administration (TSA) assigned her to John Wayne Airport in Orange County. As the aviation security liaison for airlines, McGinnis served more than 9 million passengers and a workforce of more than 450 employees.

That meant putting out fires when crises erupted at all hours of the day and night. Power outages, accusations, threats — all security issues that occur at an airport — McGinnis handled them as liaison between TSA and the airlines.

She wanted to put her organizational development skills to work.

“My brain needs to be stimulated, and I need opportunities to utilize those skills,” she said. Waste and recycling were things she could get behind.

“Waste management is a fascinating field,” she said. “It’s a completely different arena for me, and I have such respect for it.”

She also wants to better balance life and work. Last winter she exchanged wedding vows with Jason Lizana, an accountant, during an intimate church ceremony in Orange County. She’s already enjoying how her newest position has given her the perspective to prioritize her role as stepmother to 3-year-old William.

In her waste management role, she is working with county supervisors on regulations and legislation affecting Orange County waste. At 32, she hasn’t ruled out the possibility of someday running for public office.

“Working on sustainability issues feels good; it feels right,” she said. “I keep remembering that quote, ‘We do not inherit the Earth from our ancestors, we borrow it from our children.’ ”

USC 2019 | Research that makes a difference in health, the environment and more

✌ Year in review: USC scientists are serious about changing the world. Take a look at some of this year’s discoveries that are already positively affecting people’s lives.

Proud to be a trash talker