With 2013 ranking as California’s driest year on record, the USC Price School of Public Policy convened a panel of water experts on March 4 to discuss the challenges of the state’s current drought, as well as strategies that can be implemented to restore the water supply.

Dean Jack H. Knott welcomed the audience of policymakers, politicians and citizens by underscoring the timeliness of the event, which was part of the 2013-2014 Dean’s Speaker Series presented by the Athenian Society, USC Price’s premier philanthropic support group.

“Gov. [Jerry] Brown declared a state of emergency last month as the state grapples with the lowest levels of rainfall in its 163-year history,” Knott said. “In response, lawmakers passed a $687 million emergency drought relief package, which was signed by the governor. This rapid action taken by state officials underscores the seriousness of the water shortages that our cities are facing. Given this widespread impact, the Price School is working to try and find viable solutions that will help benefit our communities and our industries for the long term.”

Kightlinger mentioned that MWD has issued a regional supply alert, asking Southern Californians to cut their water usage by 20 percent. MWD also doubled its rebate funds from $20 million to $40 million, offering consumers incentives to buy front-loading washers, low-flow toilets and water-saving showerheads and to replace their lawns with xeriscaping (landscaping that reduces or eliminates the need for supplemental water).

What MWD can’t do is charge more to encourage customers to use less.

“I believe based on Proposition 218 and various things the voters have enacted that this would require constitutional changes,” said Kightlinger, who is also former chief counsel for MWD.

Fuentes added that the voting public might not appreciate an increase in their water bills: “Before any one group, board, commission or council can actually propose a rate hike, we’re going to have to really do a better job of communicating what precisely it is that we need, how much we need it and when we need it by.”

Meanwhile, the water infrastructure is crumbling. Kightlinger pointed out that the state of California hasn’t invested in a major water project since the 1960s. Regional agencies such as MWD have borne the burden of building new reservoirs and pipelines.

“The state has gotten out of that business; they’ve left it to locals to do,” he said. “And at some point, we’re going to have to go back and reinvest in California.” 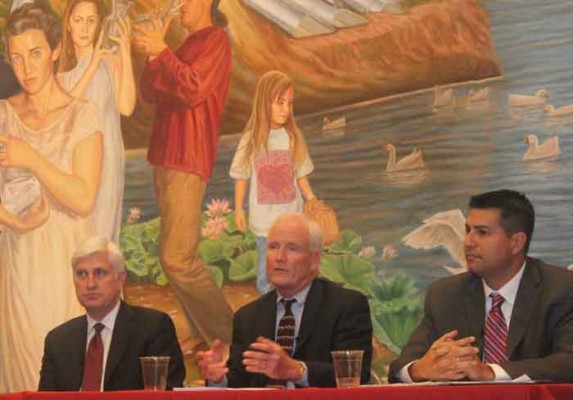 One of the most expensive and urgent infrastructure projects involves cleaning up the San Fernando Valley’s groundwater aquifers.

“Half their water supply has been reduced in the middle of this great drought because they’re contaminated,” Atwater said. “But it’s expensive — $900 million to clean up the 50 years of pollution in the San Fernando Valley. That needs to be done, but it’s going to take some time.”

Despite that estimated price tag, Fuentes believes cleaning up these aquifers would be cost-effective in the long run.

“Los Angeles imports 88 percent of its water,” he said. “It costs about $984 an acre-foot to import water. We know that you could spend a third of that if you were able to reliably pull water out of the ground — only $300 or so an acre-foot. So to me, the math works out very, very plainly. And to me, it only gets more expensive the more that you defer that capital expenditure.”

When it comes to restoring the ecosystem of the Sacramento-San Joaquin River Delta that supports the California State Water Project, this extends beyond MWD’s mission and jurisdiction. To restore the delta and improve water supply reliability, legislators have introduced an $11.14 billion California Water Bond slated for the November 2014 ballot.

“The state needs to collect money to help deal with these large-scale ecosystem problems that are existing in the delta,” Kightlinger said. “They no longer have general fund dollars to help restore vibrant ecosystems that impact all sorts of infrastructure, including water supply.”

Atwater added that the environmental problems in the delta and San Francisco Bay estuary rank with those in the Everglades and Chesapeake Bay, requiring a large-scale federal-state partnership to restore habitat.

Desalinating the Pacific Ocean would be about two-and-half times as expensive as importing fresh water, according to Atwater.

Wherever Southern California’s water originates, the panelists agreed that it should be recycled. But treating wastewater or sewage for use in landscaping or recharging groundwater aquifers can’t eliminate the shortage.

“Water recycling is a great idea, but it’s only a 10 or 15 percent solution,” Atwater said. “It’s not any cheaper than doing imported water, but we need to do it. But it’s not a panacea because only around 25 to 30 percent of our water goes down the sewers. We use most of it outdoors and for other uses that you really can’t recycle.”

Ultimately, California will need to rely on a full spectrum of strategies to address its ongoing water challenges.

“There is so much that we can be doing, and everything has a cost associated with it,” Fuentes said. “But I’m afraid that we have to do it all.”

Activists aren’t necessarily more aggressive than in the past, but they are using creative and sometime shocking new tactics that are meant to go viral to spread their message.