Steve Anderson, Media Arts + Practice Professor at the USC School of Cinematic Arts (SCA), has been named a 2014-15 American Council of Learned Societies (ACLS) Digital Innovation fellow for his Technologies of Cinema project. Anderson is co-principal investigator of the Scalar Lab, which is revolutionizing scholarship for the digital age.

Technologies of Cinema is an interactive, book-length electronic publication and critical media archive designed to model the integration of Scalar and Critical Commons for Fair & Critical Participation in Media Culture on a scale never before attempted.

The archive offers a publicly accessible collection of media depicting the evolution of computer technology as seen on American commercial film and television from the 1950s to the present. The Scalar project is a critical treatment of this history, featuring hundreds of embedded media files and a series of original video essays.

“I have been fortunate to be at USC during a very exciting time in the evolution of digital scholarship in the arts and humanities,” Anderson said.

“I’ve received generous support from within the School of Cinematic Arts and from my colleagues who have helped develop Critical Commons and Scalar. It’s very gratifying when the development of technical infrastructures lead to new ways of imagining scholarly and creative practice,” he added.

“We’re thrilled to have the American Council of Learned Societies recognize the revolutionary work Steven has been doing in advancing digital scholarship,” said SCA Dean Elizabeth M. Daley. “Steve’s approach to academic research is creative and inspiring, and his work is becoming increasingly critical to efforts to define scholarship in the digital age. We are so proud to have him represent the Media Arts + Practice division and the Scalar Lab and congratulate him on this prestigious award.”

The seven awardees, who represent a variety of disciplines, methodologies and institutions, are charged with pursuing intellectually significant research that advances the digital transformation of scholarship in the humanities. The Digital Innovation Fellowship Program is funded by The Andrew W. Mellon Foundation. 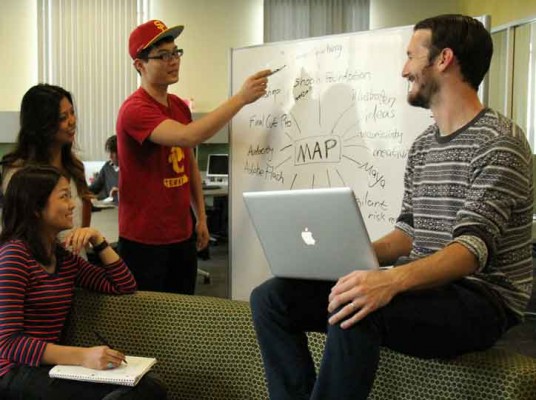 “The 2014 ACLS Digital Innovation fellows were selected from a highly competitive pool of applicants for their potential to move beyond the application of basic digital capacities to accomplish groundbreaking digital scholarship,” said ACLS Vice President Steve Wheatley. “The research projects of this year’s fellowship recipients will probe massive collections of data in novel ways, resuscitate and preserve marginalized primary sources, and pioneer new forms of multimedia scholarly publication.”

The Media Arts + Practice division is devoted to exploring the potentials of scholarly expression, visual storytelling, data visualization and social media, including business, education, medicine, urban planning and law — areas in which the ability to use media to communicate effectively is increasingly essential.

“From the beginning, the ACLS Digital Innovation Fellowships have repeatedly gone to alumni of the various Vectors and Scalar workshops hosted by Tara McPherson and Steve Anderson at the Interactive Media Lab over the last decade, so it’s very gratifying to see Steve himself receive this prestigious award,” said Holly Willis, chair of Media Arts + Practice. “We’re also grateful for the role ACLS has played in being such a strong supporter of innovative digital scholarship, and I look forward to seeing the kind of new work Steve can do with this incredibly generous support.”

The Scalar Lab at SCA explores new forms of scholarly publishing aimed at easing the current economic crisis faced by many university presses while also serving as a model for media-rich digital publication.

In essence, the lab is creating a pipeline to support emerging genres of scholarship that moves from soup to nuts, integrating core intellectual questions in fields with content acquisition, training for scholars in digital research methodologies and new paradigms and partnerships for publication, dissemination and warranting of scholarship.

USC Dornsife’s Mark Thompson, a leader in organic LED displays and photovoltaic technologies, has been elected by his peers to the National Academy of Engineering.