As part of his administration’s first international trade mission, Los Angeles Mayor Eric Garcetti met with USC alumni in Mexico City during a March 4 meeting to discuss the importance of business ties between Mexico and Los Angeles. The event was co-sponsored by the USC Marshall School of Business International Business Education and Research MBA (IBEAR MBA) program and the USC Alumni Club of Mexico.

Pendy Pendyala, executive director of the IBEAR MBA, emphasized that the program “is a strong platform for Mexican citizens looking to create trade opportunities between our two great cities and with the entire Pacific Rim corridor.”

In the spirit of strengthening the relationship, the mayor announced a new collaboration between USC and the Bank of Mexico Fund for Development of Human Resources, which establishes joint scholarships for master’s students enrolled in USC Marshall, the USC Annenberg School for Communication and Journalism, the USC Gould School of Law, the USC School of Architecture and the USC Viterbi School of Engineering.

Carlos Campos Lozano MBA ’93, sub-director for pensions at the Bank of Mexico, initiated the talks between IBEAR and the bank for establishing joint scholarships in business and other disciplines. 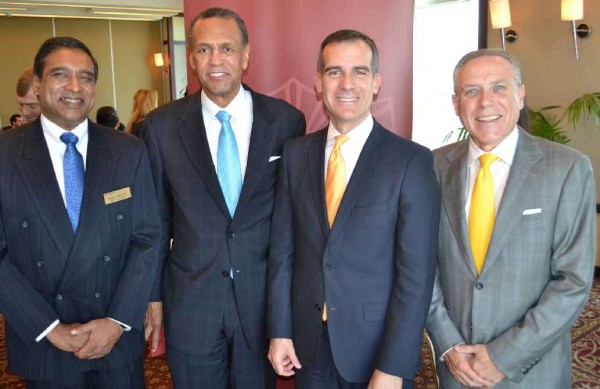 “We’re excited to partner with our neighboring country on another fellowship program that allows for intellectual and cultural exchange,” said USC Senior Vice President Thomas Sayles, who joined Garcetti as part of the mayor’s delegation.

“USC has been operating an office in Mexico City since 2005,” he added, “and has had many exemplar graduate students come to USC to pursue their studies in the arts, sciences, medicine and cinema.”

Other fellowship programs and partnership agreements are established with the National Council of Science of Technology of Mexico and the National Autonomous University of Mexico, led by USC Viterbi Professor Francisco Valero-Cuevas, whose research combines neuroscience and robotics.

Other fellowship partners include the fields of education, pharmacy, gerontology, social work, public policy and medicine.