Rogan Ferguson MAT ’12 was a successful architect who spent more than a decade in the profession – including several years with the renowned Frank Gehry – before he realized that his dream job was actually teaching.

He was certain, however, that it was too late to make the switch. Ferguson was approaching age 40 and had a mountain of student debt from Yale University as well as a young family to support. Then he learned about Math for America Los Angeles, a five-year fellowship based at the USC Rossier School of Education, in collaboration with Harvey Mudd College and Claremont Graduate University, which supports the preparation and development of math teachers in high-need schools throughout the region.

The program recruits individuals with a passion and talent for math to teach in the schools that need them most. MfA LA fellows earn a degree in teaching, receive regular professional development and personal support, and collect annual stipends to supplement their teaching incomes.

“Math for America LA made it possible for me to switch careers,” said Ferguson, now in his second year as a teacher at Social Justice Humanitas Academy in San Fernando, Calif. “The stipend and educational support helped me to make the leap. I can’t imagine a more supportive entry into the teaching profession than that provided by MfA LA.”

His well-loved math classes integrate architecture, history, science and the arts, and Ferguson, like so many of other fellows, has finally found his dream job.

Since it began in 2008, MfA LA has supported 70 fellows, placed in 42 underserved high schools across the Los Angeles region, who are transforming math education.

One of the most effective components of the MfA LA fellowship program is its “clustering” of several fellows within the same schools. In fact, 65 percent of fellows teach at schools that employ other fellows.

Clustered fellows – with their power in numbers – can influence their math departments, schools and even districts. Such is the case at Ramón C. Cortines School of Visual and Performing Arts in Los Angeles, where the creatively inclined student body is also 80 percent eligible for free or reduced price lunch, an appropriate predictor of students living in poverty. Currently, four MfA LA fellows are clustered at the school and have led a number of initiatives in their department.

Led by the fellows, three of whom earned their Master of Arts in Teaching degrees at USC Rossier, the school now offers “double-block” Algebra I and II courses, and the entire math department recently benefited from ideas the fellows shared from a conference on the implementation of Common Core State Standards.

Starlie Chinen MAT ’10 said the support was especially critical during her first years of teaching.

“Having a coach during my first couple of years was super helpful because you really don’t have much of a reference point,” said Chinen, now math department co-chair at Cortines. “They would tell us what we were doing well and how we could improve. We got a lot of ideas and materials.”

Meoshe Williams MAT ’10 was leaving an abstract algebra class in college when she saw a sign in the hallway: “If you know the chain rule has nothing to do with hardware, then Math for America is for you.” She had discovered a way to combine her talent for math with her love for children.

“Teaching made me nervous, but I knew that in this program, I would learn and have professional development opportunities,” she said. “And on my first day as a teacher, I felt really comfortable because I had learned so much at USC and was going through the process with the other fellows.”

In subsequent years, two other fellows were hired at Cortines – Craig Weidert MAT ’11 and Kelvin Cheung, who earned his degree at Claremont Graduate University. In the last three years, their students’ CST scores have improved by 10 percent.

Masters of their craft

In June 2012, MfA LA launched its Master Teacher Fellowship program, which gives experienced math teachers the time, resources and support to undertake a student-centered change at their schools. Currently, there are 21 such fellows at 11 schools in the program.

At Glendale High School, three math teachers in the program are given one period each school day to collaborate on curricular content, assessments and instructional strategies. 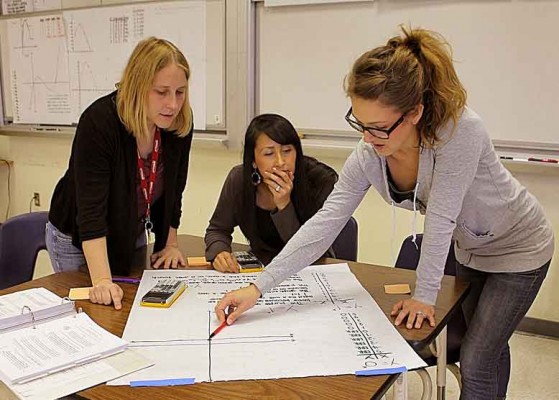 “In the past, we helped each other or shared things on and off, but it would be when we were walking in the halls or taking walks around the Rose Bowl after work,” said Aurora Alamillo, a 14-year teaching veteran and math department chair at Glendale High.

“Now with a collaboration period every day, we’re pushing our students even more. There are three of us brainstorming, sharing and discussing, and there is immediate reflection and modification. That is so powerful.”

Stephanie Erickson MAT ’09, an MfA LA fellow alumna, said she found her five-year stint so “fundamentally life-changing” that she wanted to continue as a Master Teacher fellow — and she enlisted two Glendale High colleagues to join her.

“Being in a community of mathematicians who are supportive of one another is so valuable, and I’m experiencing a level of teaching I could never have imagined,” she said. “I have been pushed to be better on every front, and because of the support, I am better. I am thankful for that. This program has set me apart in a very big way.”

The Master Teacher fellows receive constant support, resources and professional development opportunities — from monthly training sessions to summer-long residential programs, which they can then share with other teachers at the school.

“One of the things that happens to teachers as they get more experienced is that they can become isolated. When you get a rhythm going and you stop requiring the help of others for survival, it becomes challenging to find the time to collaborate,” said Sarah Morrison, who has taught calculus for 12 years at Glendale High.

“This is giving us back the ability to work together and push ourselves to become better teachers.”

Never underestimate the power an exciting story can have on a child prodigy — young Irving Reed was impressed.