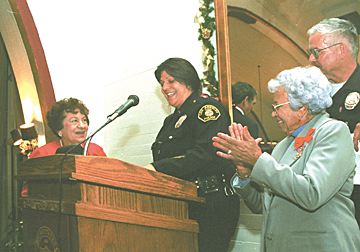 About 600 guests, primarily local families, gathered in Town and Gown for the annual Holiday Reception Awards Ceremony in USC’s Town and Gown on Dec. 7. The event was sponsored by USC Civic and Community Relations, USC Auxiliary Services, Kid Watch and ECCLA.

Isabelle de la Torre (at podium) and Mary Wiley (right) were honored as the two Outstanding Kid Watch Volunteer Award winners. Presenting the awards are Lt. Nancy Ramirez and Officer Randy Cochran of the Los Angeles Police Department. De la Torre has lived in the neighborhood for more than 40 years and has been an active Kid Watch volunteer since 1996. Mary Wiley, who has lived near Foshay Learning Center for 52 years, also joined Kid Watch in 1996 and has recruited other neighbors to take part.

Deputy Chief Bob Taylor of USC’s Department of Public Safety presented the award for the annual anti-graffiti poster contest, which was organized by the USC Family of Five Schools Safety Task Force.

The program included a performance by the USC Concert Jazz Ensemble under the direction of USC Thornton School of Music’s Bruce Eskovitz.

Samuel Mark, CCR’s assistant vice president, said a highlight of the evening was a wealth of door prizes. “This year the regular door prizes were supplemented by Morrie Notrica of 32nd Street Market. He donated 10 TV sets, 10 bicycles and more than 20 $50 gift certificates,” said Mark. “The guests were delighted.”