In the first scene of Molière’s Tartuffe, actor Dee Dee Stephens appears as a French servant girl. Less than an hour later, she makes her second entrance as a middle-aged gentleman, adding 80 pounds, a goatee, mustache and notably bushy eyebrows. Three minutes later, she re-enters, thin again and balancing herself on stilts as the bewigged and beribboned King Louis XIV.

But wait, there’s more. Stephens and her 10 fellow third-year MFA Acting students at the USC School of Dramatic Arts are in the midst of a demanding one-month repertory schedule, which involves rotating performances of three different plays.

The company may perform the mid-17th-century comedy at a matinee, and hours later, mount the enduring Thornton Wilder drama Our Town, set in 1901 New Hampshire. The next day, the actors will find themselves in the Aegean Islands during the Peloponnesian War in Trojan Women, a new interpretation of Euripedes’ play written entirely by the MFA Acting class and director David Bridel.

From now through March 9, they will do 24 performances, eight of each play.

All 11 third-year MFA actors take on a wide range of roles for the repertory experience, which is their thesis project. Jamie Cline, for example, plays a young love interest in Tartuffe, the much older stage manager in Our Town and a king in Trojan Women.

“The repertory experience is a vast challenge for the actors, who have to live in three different worlds at the same time,” said Cameron Watson, who is directing Our Town. “It’s also incredibly rare. USC is one of a few programs to offer it.”

Dee Dee Stephens, who portrays Helen of Troy in Trojan Women and Emily Webb in Our Town — in addition to her three roles in Tartuffe — said that playing characters that vary in age, gender, shape, nationality and time period stretches all her muscles.

“Since we all created the script for Trojan Women, that role is totally locked in my body,” she said. “The most challenging mentally is playing the ingénue in Our Town when she’s really young. How do I portray this character who is so far away from me?”

Andrew J. Robinson, director of the MFA Acting program and director of Tartuffe, noted that the actors in repertory sometimes play roles they would not be hired to play by commercial theaters.

“Dean Madeline Puzo has remarked that ‘repertory theater is the triumph of miscasting,’ ” Robinson wrote in the plays’ program. “Nothing stretches an actor more than to struggle with a character that’s 180 degrees removed from her or his ‘type,’ ” he continued. “It’s this kind of ‘miscasting’ that often allows for revelatory performance.”

Costume designers cut to the chase

Plaudits go to the three productions’ costume designers, who bring their depth of experience and careful research to the look of each character, allowing the role-hopping actors to create different personas from scene to scene, if necessary.

Costume designer Kate Bergh, who works in opera, dance, film and ad styling as well as theater, encountered a big challenge for Our Town, her first USC production. Director Watson wanted the actors to fashion their costumes from the contemporary clothes they wear as they stroll onto the stage as college students.

“The actors all look kind of bulky when they come in,” Bergh said, “and in the course of the play, they’ll tie a shirt around their waist as an apron, turn clothes inside out and use everything they came in with.”

Tina Haatainen-Jones, head of costume design at USC Dramatic Arts, is a sculptor, set designer and costumer who designed Trojan Women with a contemporary bent. Her costumes included overcoats and fedoras for a Greek chorus of wise guys and mottled watercolor fabrics for the women’s column dresses.

Howard Schmitt, who manages the USC costume shop and serves as the costume designer for Tartuffe, took pains to make all the pieces historically accurate. He noted that during the Renaissance, men’s breeches were tied to vests with ribbons. By 1660, the setting for Tartuffe, ribbons were still seen at men’s waists, but were decorative only — vestiges of something functional. He also added witty touches, such as decorating Louis XIV’s stilts to look like the Gates of Versailles. 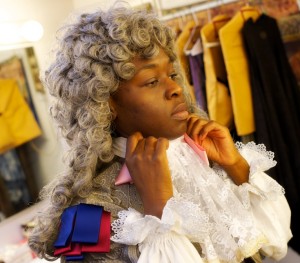 Stephens, a third-year MFA Acting student, adds a wig to her costume for King Louis XIV, one of three roles she plays in Tartuffe. (USC Photo/Dietmar Quistorf)

But above the costumes and makeup, it is the actor’s skill that can put across a collection of characters day after day.

“Multi-play rep is not for the faint of heart,” Robinson summed up. “It requires stamina, patience and true belief in the creative imagination.

“It’s an experience that strengthens and expands presence, the actor’s most valuable asset,” he wrote, adding that he is “deeply grateful to Dean Puzo and the School of Dramatic Arts for keeping the experience alive here at USC.”

A schedule of remaining performances is available.

The USC student support group Unchained Scholars helped Genevieve “Genna” Rimer on her path to a doctorate in social work.

The office supports Trojans’ well-being by identifying sources of personal and professional meaning and inclusion in the classroom, in the workspace and among peers.

Back to school at 30: Grad students reveal why they returned for their master’s

Playbook VR would allow anyone to build virtual reality experiences, without requiring coding or other background knowledge.