After a recent speaking engagement at a Texas high school, Alexis Jones ’05, MA ’06 was approached by a young girl in tears. An aspiring ballerina, the girl told Jones she felt so pressured she had been starving herself and was feeling suicidal.

“When I speak in schools, I hear some awful things about eating disorders and self-harm, things that girls have never told anyone because they don’t feel safe,” said Jones, co-founder of the nonprofit, I AM THAT GIRL, which aims to inspire girls to love themselves unconditionally.

But this girl, whom Jones called Jennifer to protect her identity, was reaching the point of no return. “She told me ‘I wrote a suicide note this morning. But I don’t want to do that anymore because I want to do what you do,’ ” Jones said.

“I told her she couldn’t take care of other girls unless she first took care of herself. When I asked her if she would do that, she replied, ‘Whatever it takes.’ ”

Jones immediately notified the appropriate authorities and helped get Jennifer the help she needed. Now, Jones said, Jennifer has taken steps on the road to recovery.

Through her work with I AM THAT GIRL, Jones has spent the last five years speaking to more than 250,000 girls in person and millions more online regarding self-esteem, bullying, leadership, activism and social entrepreneurism. Fortunately, not many are as desperate as Jennifer, but most suffer from insecurity and lack of self-esteem.

“A girl’s physical, emotional and mental well-being is rooted in her self-worth. And we are living in an epidemic of self-doubt,” Jones said. “I AM THAT GIRL exists to transform self-doubt into self-love and inspire that in others.”

Jones’ new book, I Am That Girl (Evolve Publishing) provides a how-to guide for doing just that.

“When people learn what I do, they often say ‘How adorable! You work in girl empowerment.’ And I reply ‘Adorable? Are you kidding?’ That’s an adjective I would never use. Confrontational, yes,” Jones said.

“Business is easy. I can put together financial and communication plans in my sleep. But asking people the hard questions in life, asking them if they really love themselves and if they are actually happy — that’s tough.”

Born in Austin, Jones earned a bachelor’s degree in international relations from the USC Dornsife College of Letters, Arts and Sciences and a master’s in communication management from the USC Annenberg School for Communication and Journalism.

First, she landed a role in a campus production of Eve Ensler’s play The Vagina Monologues.

“That was the first time I really got excited about girls’ and women’s issues,” she said. “They weren’t really on my radar before then. I had studied abroad in Spain and in my head I was studying to be an ambassador to Latin America.”

Then, a campus poster inspired her to audition as a presenter for Doing It for Reel, a USC television show about the celebrity red carpet. A resulting three-year gig enabled her to attend movie premieres, interview Hollywood heavyweights and get an inside look at the entertainment industry. It also gave her the opportunity to build some powerful relationships.

“Both events testify to the caliber of USC, which provides not only the theoretical education but the opportunity to tackle new experiences and step outside your comfort zone,” she said. 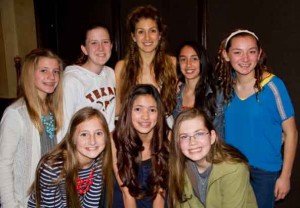 High school students surround Jones after she gives an inspirational talk in her hometown of Austin.

A Kappa Kappa Gamma sorority member, Jones started I AM THAT GIRL at USC so young women could discuss the issues they were struggling with, whether it was pressure at school, relationship problems or body image.

“We live in a world that teaches us from a very young age that our self-worth is commensurate with our physical attractiveness,” she explained. “In that very dangerous paradigm, girls are not taught to love themselves unconditionally. Instead, we are held up against unattainable expectations of beauty.”

This problem has been exacerbated by a multibillion dollar beauty and fashion industry with its Photoshopped images, Jones said. That insecurity is compounded further by social media, with its focus on posting highlights of our lives, and — in worst-case scenarios — cyberbullying.

“Girls aren’t talking about what is really going on in their lives or the pressure they are under,” Jones said. “We are bred to create this idealized façade, but beneath the surface, we’re all too scared to admit to our insecurities.”

Jones decided to hold weekly meetings where young female undergraduates at USC could talk about what really mattered in their lives. Six showed up to the first. Soon, Jones said, hundreds were attending.

In addition to creating local chapters of I AM THAT GIRL, the international nonprofit spreads its message of self-empowerment through inspiring content on its website iamthatgirl.com and social media.

Jones, who sees the digital revolution as both the culprit and the solution, acknowledged the irony.

“In today’s world, media is the most powerful tool to influence how a girl defines herself,” Jones said. “We’re providing tangible tools and resources with an interactive curriculum to teach girls emotional intelligence, professional skills and personal development.”

Aimed at high school and college girls ages 15 to 22, I AM THAT GIRL also draws middle schoolers. But mothers and women in their 60s and 70s also seek out the group for support.

“Over the past five years, we’ve connected with hundreds of thousands of girls, telling us how the I AM THAT GIRL community has turned their stories of struggle and adversity into stories of triumph, connectedness and empowerment,” Jones said. “But it’s not just girls. These issues are a universal truth for women. At one recent talk at a Los Angeles school, I had as many moms crying as daughters.

“We’re all starving for that message of unconditional love and being given permission to feel insecure and scared is so powerful for all of us,” Jones said.

In 2011, Jones met Michelle Obama when she was invited to the White House for the 100-year anniversary of International Women’s Day.

After giving the first lady her card and suggesting that her group co-host an event at the White House, Jones got a call from Obama’s assistant saying she was impressed with her bravado and wanted to invite her back.

Jones returned to the White House to discuss a healthy media initiative she created to examine media impact on girls.

Paradoxically, despite her apparently abundant self-confidence, Jones is no stranger to insecurity.

“One of my greatest struggles as a student was thinking I had to do things to deserve love, rather than believing I am intrinsically worthy of it,” she said.

She cited Steve Lamy, professor of international relations and vice dean for academic programs, as her greatest influence at USC Dornsife.

“Professor Lamy was the first teacher who really pushed me to think for myself. I don’t think I would have the courage or the confidence to go on to do what I have done in my life if he had not poured all that faith into me.”

Jones, who has worked at Fox Sports and ESPN, was a contestant on Survivor and was cast as a life coach for the MTV show Made, said her future plans involve diving back into media and entertainment.

However, she is not abandoning her life goal. When deciding which avenues to pursue, she has adopted a steadfast rule.

“My personal mission statement is ‘Loving Girls Back to Life,’ ” she said. “It’s a great litmus test. Does this project serve girls’ greater good? If not, I don’t do it.”

A COVID-19 diagnosis within a family can cause significant distress. Experts from the USC Dornsife Center for the Changing Family offer tips to help families weather the psychological storm together.

She serves girls for the greater good