PhD ’87 love to share memories of the principals and school leaders that mentored them throughout their two extraordinary careers as educators.

She recalled Joe Bethel, principal at Loma Vista Elementary School, who told her to “speak up!” She spoke lovingly of Carrie Haynes, then in the Los Angeles Unified School District (LAUSD) regional office, who encouraged her to pursue a post as principal. Her husband remembered Saxson Elliott, his basketball coach at California State University, Los Angeles, who later became a department chair and gave him his first teaching job at CSLA.

In many ways, those memories led them to give a gift that will prepare a new generation of school leaders to register just as much impact. 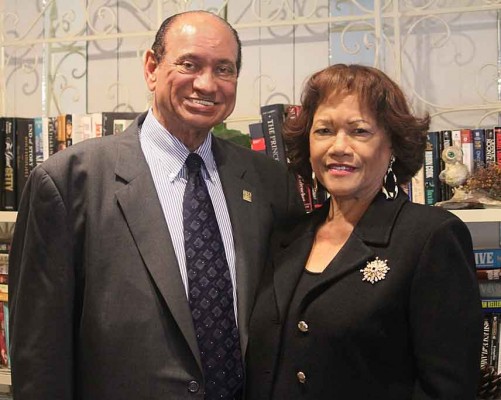 The gift from Carlton and Eloise Blanton will support students who “bounce back from adversity.” (USC Photo/Kathy Christie)

The Dr. Carlton and Eloise Blanton Endowed Scholarship at the USC Rossier School of Education will specifically support students who aspire to be school principals. The Blanton’s gift of $160,000 will support the studies of students who, as the Blantons put it, “have resiliency, bounce back from adversity, are good listeners and are highly motivated.”

The Blantons care deeply about supporting those students who wouldn’t otherwise be able to afford a USC education.

“We have always wanted to do this,” they said.

Because for these two, who refer to one another as “my best friend,” their lives together and as educators were greatly shaped by USC.

Eloise Blanton is a hometown girl whose father owned property in USC’s neighborhood. Carlton Blanton is Texas born and raised, and for his key high school years, pretty much raised himself. He moved with his parents to Southern California in ninth grade but, not feeling challenged in his new school, persuaded them he could go back to Texas alone.

From the age of 14, he lived on his own in the house they had left behind and went to school, graduating No. 2 in his high school class at age 16.

The Blantons met at a USC fraternity party when she was a Trojan undergraduate and he was at CSLA. Carlton loves to tell the story of his wife arriving with USC sports superstar Don Buford, but accepting a ride home from Carlton, who impressed her parents by getting her home ahead of her midnight curfew. The two have been at each other’s side since.

Both got their first jobs in LAUSD in 1964 — she at West Vernon School, he at Carver Middle. They married in 1966.

Eloise followed Carlton to CSLA, where he was ultimately chair of the health sciences department. It was there that she received both her master’s degree and administration credential in 1974. After graduating, Eloise built a noteworthy career as an educator in LAUSD, starting as a teacher and later a reading specialist, resource guide, district consultant, assistant principal and principal. She was on the team that first integrated 10 K-6 schools in LAUSD.

Carlton acknowledged that he learned from USC’s best. He recalled special mentors during his doctoral program at USC Rossier, which he completed in 1987.

Earl Pullias, one of the founding faculty of USC’s Department of Higher Education, for whom USC Rossier’s internationally known research center is now named, was Carlton’s first adviser. When Pullias retired, William Millington took on the role, including chairing Carlton’s dissertation.

Carlton doesn’t hide his admiration for them and other faculty.

“USC is so impressive,” he said. “They are always striving for excellence.”

The Blantons see that same excellence in the current leadership at USC Rossier.

Eloise was on the team that interviewed Dean Karen Symms Gallagher when she was approached to take over the dean’s chair in 2000. Both Blantons were impressed. They believe deeply in USC Rossier’s vision that all children can learn. According to the couple, they just need “tender loving care with good teachers and good school leaders.

“We also love the research orientation that the dean has brought to the school,” Carlton said. “Plus, she is a great fundraiser and that is crucial. If you don’t have leadership in that area, then you don’t have resources to do the important work.”

The couple’s endowed scholarship demonstrates their own commitment to supplying the resources to do the work. Carlton proudly recalled his own professional days as a school leader and is eager to contribute to the education of many more such administrators. Educating young people, he said, “really is a challenge … if you do it correctly.”

They both love to quote Gallagher, who shared a personal credo in one of their first conversations. “Don’t always look in the rearview mirror. Look forward.”

The Los Angeles Times staff writer will receive the Sí Se Puede Award for her persistence and tenacity as a journalist.