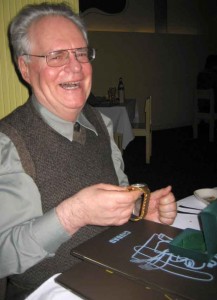 Cornelius Schnauber at his retirement dinner in 2006, being presented with a souvenir USC watch by the Department of German faculty. (Photo © Gerhard Clausing)

Associate Professor Emeritus of German Cornelius Schnauber, an eminent and highly decorated scholar, historian, playwright, novelist and pianist who taught at the USC Dornsife College of Letters, Arts and Sciences since 1968, has died. He was 74.

Schnauber died in Los Angeles on Feb. 21, surrounded by family and close friends after suffering a heart attack two weeks ago.

“We all gathered around him and sang German and Austrian songs and reminisced about our times traveling together in Germany and Switzerland,” said Schnauber’s daughter, Christina Linhardt. “It was very beautiful.”

In addition to teaching German literature at USC Dornsife from 1968 to 2006 and chairing the Department of German from 1975 to 1984, Schnauber founded the USC-Max Kade Institute for Austrian-German-Swiss Studies in 1984 and served as its director until 2011. He was a prolific writer who published dozens of books, plays, biographies and scholarly articles.

“Cornelius Schnauber will be remembered as a tireless advocate of German-Jewish reconciliation and a pioneering scholar of the German-speaking exile community in Southern California,” said Paul Lerner, USC-Max Kade Institute director and associate professor of history at USC Dornsife. “He leaves behind an enormous legacy of literary, theatrical, musical and scholarly achievement. He will be sorely missed.”

Schnauber was born on April 18, 1939 in Freital, on the outskirts of Dresden, Germany. He was 5 years old when Allied forces bombed Dresden at the end of World War II, a trauma he claimed he would never forget. Growing up in East Germany after the war, his mother was an operatic singer. His maternal grandparents were painters who specialized in Dresden porcelain art; his uncle, a famous violinist. Surrounded by artists and musicians from an early age, Schnauber was himself a talented piano player, but he decided against a career as a concert pianist.

Growing up in Nazi and postwar Germany affected Schnauber deeply, Lerner said. Schnauber’s father was among the first Nazis, working in an administrative role governing a small town in Italy and later for the Nazi Red Cross during the war. Disturbed by this knowledge, Schnauber devoted his life to building German-Jewish relations.

“Cornelius felt a responsibility for German atrocities, even though he was only a small child then, which eventually led to his creation of the German-Jewish dialogues at the Kade Institute,” Lerner said. 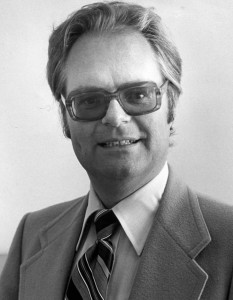 In 1984, Schnauber founded the USC-Max Kade Institute for Austrian-German-Swiss Studies, directing it until 2011. (Photo/courtesy of USC Archives)

Described by the Jewish Journal as “a leader in fostering German-Jewish relations,” Schnauber was co-founder with photojournalist Morris Kagan of the German-Jewish dialogue, which for more than 20 years brought together Germans and Jews of the postwar generation for reconciliation and healing.

Escaping then-East Germany twice during the 1960s, Schnauber earned his doctorate at the University of Hamburg, where he studied German literature, phonetics and political science. It was there he met his future wife, Judith Docter, an American student from Stanford University studying abroad in Germany.

Moving to Los Angeles and beginning his tenure at USC Dornsife in 1968, Schnauber and his wife had two children, composer and music professor Tom Schnauber, and concert singer and performing artist Christina Linhardt. The family spent three months every year in Germany, Switzerland and Austria to allow Schnauber to build relationships with potential guest lecturers for the USC-Max Kade Institute, write for European newspapers, do his own writing and visit family.

“My father loved to just sit for hours with a beautiful view,” Linhardt said. “When we went out to dinner or a café, he was very particular about getting the absolute best seat by the window, or Fensterplatz, even if we were on an outdoor patio. We’d sometimes try five different tables before finding the best place.”

A friend to German-speaking exiles

A personal friend of many famous German-speaking émigrés in L.A. — including actors, writers, artists and musicians — Schnauber’s goal was to bring together newcomers from Germany with authors and composers from German-speaking countries and share their cultural riches with the USC and L.A. communities.

Added Linhardt: “The institute was really my dad’s baby and where he was able to do a lot of his work. His big interest was the German-speaking émigrés — lots of his books were about the ones who came here to build during the golden years of Hollywood. Billy Wilder was a sort of ‘patron saint’ of the Max Kade Institute. Fritz Lang was a good friend of my dad’s and used to come to USC often for his events.”

Schnauber was also involved with music, and in 1992 began serving as the German diction coach of the Los Angeles Opera, helping to give performers a better understanding of the relationship between text and music in German operas. He wrote a biography about opera singer Placido Domingo, a personal friend.

In 2003, he was honored with the “Resolution Cornelius Schnauber” from the L.A. City Council for his contributions to the understanding of the cultural heritage of the city of Los Angeles and the long-standing history of friendship between Berlin and L.A. He also wrote an autobiography, From Dresden to Hollywood: Memories, Reflections and Encounters of Both Worlds, a Friend Told in 7 Vigils (Dresden: Progressmedia Verlag und Werbeagentur, 2010).

In addition to Linhardt, Schnauber is survived by his ex-wife, Judith Docter; son Tom Schnauber; and grandchildren Johannes, Anneke and Mathias Schnauber.

The very selective awards recognize significant accomplishments by leading scholars in their fields.

Over a five-decade career at USC, the professor, administrator and chief fundraiser helped build today’s school of public policy.