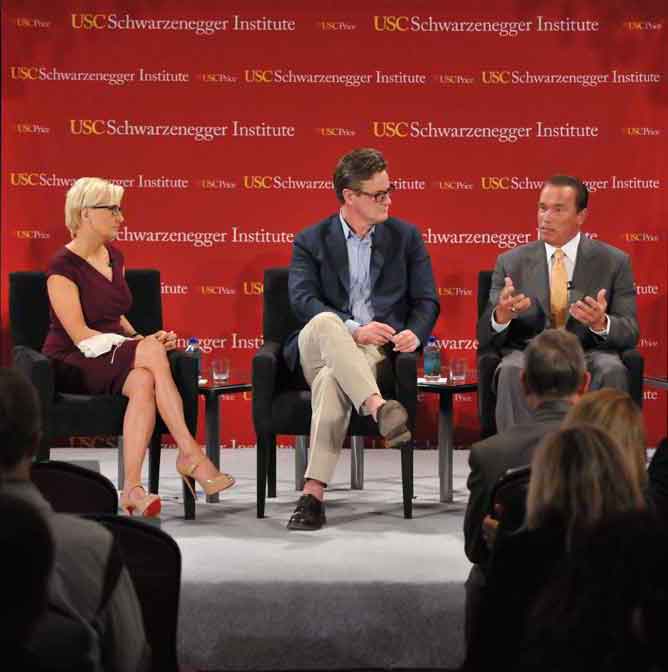 In an era of political gridlock and hyper-partisanship, the USC Schwarzenegger Institute for State and Global Policy on Feb. 24 held a symposium on government and leadership — titled “People Over Politics” — that brought together expert faculty, practitioners and news media to discuss what it will take to make the federal government work again. The solution may be as simple as looking to California.

Former California Gov. Arnold Schwarzenegger opened the event at USC’s Town & Gown ballroom by telling the many students in attendance that the country’s political system has let them down.

“When Congress has a 10 percent approval rating but 90 percent of the time they get re-elected, then you know there’s something off, and it is a fixed or rigged system,” said Schwarzenegger, the Governor Downey Professor of State and Global Policy at USC and chairman of the Schwarzenegger Institute, which is housed at the USC Price School of Public Policy.

Schwarzenegger outlined his efforts to break the state’s legislative gridlock in his time as governor during the first panel, examining if there is an end in sight to political gridlock, which also featured MSNBC Morning Joe co-hosts Joe Scarborough and Mika Brzezinski. Susan Kennedy moderated the discussion, which was appropriate given that Schwarzenegger’s first step to transcend partisanship as a Republican governor was to appoint the Democrat-affiliated Kennedy as his chief of staff.

Schwarzenegger also pushed for two electoral reforms in California that early evidence suggests have led to the state legislature becoming more moderate and less polarized, according to research presented at the event by Christian Grose, associate professor of political science at the USC Dornsife College of Letters, Arts and Sciences.

There is an argument that gridlock is a necessary part of American governance, with friction between the federal government’s branches designed to protect people from unimpeded power. But others contend that gridlock goes too far when it’s stopping the biggest challenges of the day, such as immigration reform and energy policy, from being addressed.

“Gridlock is good as long as you have two sides that are working together constructively in the best interests of the country,” Scarborough said. “Something’s been lost.”

The importance of building relationships

Part of the problem, according to Scarborough, is a political system that encourages extremism. Reflective of the cable news generation in which everybody runs to their corners, members of Congress are rewarded for being extreme when they head back home to their districts. Politicians look at their opponents as an enemy rather than someone from whom they can learn.

Scarborough reminisced about the days when Republican President Ronald Reagan and Democrat Speaker of the House Tip O’Neill fought all day but at 6 p.m. became friends.

“There was a healthy respect,” he said, “that’s missing from Washington today.”

“Today, everything is done on the Internet,” Schwarzenegger said. “Everyone is texting. There’s no more personal kind of relationships. The legislature leaves Washington Thursday afternoon. They’re not hanging out anymore like in the old days.”

Former Los Angeles Mayor Antonio Villaraigosa spoke from the audience on how he and Schwarzenegger were able to work together across party lines.

“There’s a notion today that incremental change is a bad word,” said Villaraigosa, who is now a professor of the practice of policy at USC Price. “You were very focused on getting half a loaf, and I think that was the key to your success.”

Recapping suggestions from the panel, Brzezinski urged students in the audience to be visionary, to have the courage to defy special interests and even their own party to reach that vision, and to be prepared to risk failure.

“If you’re in this room, you’re interested in what we’re talking about and we need you not just voting, we need you thinking about serving because we have a very bad batch in Washington right now,” she noted.

Grose looked at two reforms enacted by the voters to change the polarization in California — open primaries, in which the top two candidates regardless of their party advance to the general election; and second, having a nonpartisan California Citizens Redistricting Commission draw legislative district lines rather than the previous system of having incumbent legislators draw their own lines.

Feng recalled the resistance she faced when representing the Asian community leading up to the redistricting round in 2000. Legislators would listen to her concerns and smile, but the legislators drew the lines the way they needed to protect themselves.

“This is an ugly, ugly game where redistricting combines with racism, combines with power,” Feng said. “When people need to hold on to power, they will do what they need to do.”

Salit said there are currently a dozen states considering open primaries. Redistricting, however, is a more difficult proposition, as only 24 states have initiative processes, and it would be difficult to go through legislatures and ask them to give up the power. Feng said that redistricting is being considered in Illinois, Indiana, Ohio and North Carolina.

“The impact of what took place in California cannot be underestimated,” Salit said. “It was huge. It is motivating forces and people who took a shot, lost, were upset about the failure and walked away to reconsider the issue.”

During his keynote address at the USC Global Conference in Seoul, South Korea, former California Gov. Arnold Schwarzenegger candidly revealed some of the secrets to his success.

Students from “Celebrating Leadership for a Post-Partisan Age,” the inaugural class stemming from the new USC Schwarzenegger Institute for State and Global Policy, presented their final projects to former Gov. Arnold Schwarzenegger.