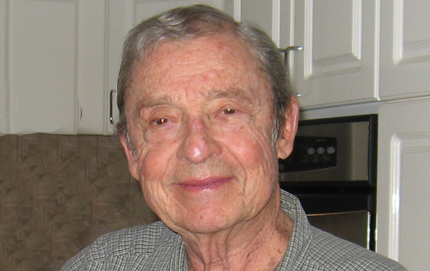 Professor Emeritus of Mathematics Edward Blum, a specialist in scientific computation, parallel computing and numerical analysis, who taught at the USC Dornsife College of Letters, Arts and Sciences for more than 40 years, has died. He was 90.

Blum died from natural causes at his home in Brentwood, Calif., on Feb. 22 following a battle with cancer.

“Our father talked passionately with us about his theories for ways in which applied mathematics and numerical analysis could explain biological processes,” his daughter Amy Blum-Herkenhoff said, speaking for the family. “He taught us the importance of seeking out knowledge and finding a passion in life. He was very committed to his students and frequently shared stories about his classes and PhD students.”

Blum created a computer language and was an important force in the development of interdisciplinary research at USC Dornsife. He also held a joint appointment at the USC Viterbi School of Engineering. In 2010, he made an enduring contribution to USC by helping to establish and fund USC’s Center for Applied Mathematical Sciences Graduate Student Prize for Excellence in Research for contributions to the fields of mathematics and physics.

“Ed Blum had a remarkably long and distinguished research career,” said Francis Bonahon, professor and chair of mathematics. “At USC, he was a leading force in interdisciplinary efforts combining mathematics, computer science, neuroscience and biomedical engineering.

“He was devoted to his graduate students and very considerate to the staff and others who worked with him.”

Born in Brooklyn, N.Y., on Dec. 1, 1923, to Jewish immigrant parents, Blum grew up loving books and mathematics. His father, Jack, was Polish and worked for the U.S. Post Office. His mother, Esther, was Austrian. As a child, he spent long summers helping milk the cows at Blum Dairy, his relatives’ farm on the outskirts of New York.

In 1944, Blum graduated from Cooper Union in New York with a Bachelor of Science degree in mathematics. During World War II, he served in the U.S. Navy as an Electronic Technician Mate 2nd Class. After the war, he received his PhD in mathematics from Columbia University.

His first job was in a government laboratory in Washington D.C., where he met his wife, Dolores “Lori” Shaw. They married in 1953 and three years later, moved to Los Angeles. Blum had accepted an engineering post at TRW, where he worked on rocket thrust trajectories for travel to Mars.

He then served on the faculties of the University of Maryland, the Massachusetts Institute of Technology, UCLA and Wesleyan University, and joined USC Dornsife in 1966 as professor of mathematics.

Originally working in pure mathematics, he quickly turned his attention to the then-emerging field of computer science.

In addition to expertise in numerical analysis and dynamical systems, Blum was interested in neural networks. He developed a programming language he called CAJAL in honor of the Spanish neuroanatomist Ramon y Cajal. CAJAL is still being used today.

A pioneer in cluster computing, Blum developed a patent on a method for connecting computer workstations in clusters to perform parallel-distributed processing.

During his career at USC Dornsife, Blum became interested in computer analysis and modeling to study the brain and to treat paralysis. A leading force in interdisciplinary research efforts combining mathematics, computer science, neuroscience and biomedical engineering, he was also instrumental in creating the Neural, Informational and Behavioral Sciences program, now the Neuroscience Research Institute.

He was the author of a highly respected textbook on numerical analysis and, more recently, of a textbook on methods of applied mathematics for physicists and engineers.

He remained active in writing, teaching and advising doctoral students until his retirement in 2007 and kept working on his research and editorial duties until his death.

In 2011, he wrote Computer Science: The Hardware, Software and Heart of It, which focuses on the deeper aspects of the two recognized subdivisions of computer science, software and hardware. He was preparing a special edition on the Higgs boson for the Journal of Computer and System Sciences when he died.

“My father cared so deeply about USC, about his PhD students, and about using math and computer science to better understand biology, physics and the world,” Blum-Herkenhoff said.

“For my father, teaching and research discovery were everything. It’s what made him happy.”

An avid traveler and keen skier and tennis player, Blum remained active in retirement, taking up golf at age 80 and bringing his large extended family together for fishing, hiking and boating vacations.

“He was the pillar of our family,” Blum-Herkenhoff said. “He always let people know what he thought and believed, but he was always a teacher. He never told people what to do, but instead told them how they could learn to do it.

“He was always there for his wife and family with inspirational words, logic and sharing his own life experiences to help guide us through our lives,” Blum-Herkenhoff said. “He loved having his family around him and hosted us all on family vacations to the mountains, the desert and the beach. He was a generous, loving and devoted family man, and we will continue to feel his presence in our lives forever.”

In addition to Blum-Herkenhoff, Blum is survived by his wife; daughters Debbie Ryan and Beth Firestone; nine grandchildren; eight great grandchildren; his sister, Phyllis Decker, and his nephews Mark and Bob.