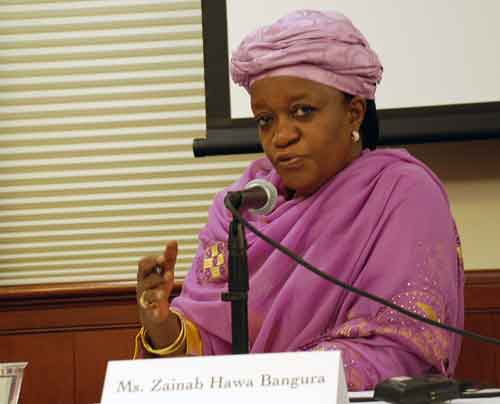 United Nations Undersecretary-General Zainab Hawa Bangura said “rape is as devastating as any bullet” during her visit on campus. (USC Photo/Krystal Szabo)

Using sexual assault as a weapon of war is a deep-rooted problem that causes misery and pain long after the fighting stops.

But efforts are being made to curb the ancient practice by documenting instances when they occur and punishing perpetrators who commit them.

Speaking at USC on Feb. 20, Zainab Hawa Bangura, the United Nations undersecretary-general and special representative on sexual violence in conflict, said that sexual assault is a deliberate tactic used to demoralize not only women — its most frequent targets — but also to destroy families and tear apart communities.

“When rape is used as a weapon of war, it is not by accident, and it is as devastating as any bullet and as destructive as any bomb,” she said.

But numbers alone don’t convey the sense of personal tragedy. At the start of the event, Gitow showed a clip of Bosnia: Healing the Wounds of War, a documentary featuring a woman who recounted the horror she and others endured at the hands of Serbian forces. Returning to the place where she and many others were kidnapped and raped, Enisa Salcinovic breaks down in tears as she relives the painful event.

Sexual assault during war involves more than rape, and its victims include men and boys, Bangura said.

“Twenty years after the war in Bosnia, we are learning more and more about men and boys who were subjected to various forms of sexual violence, including being forced to rape their own family members,” she said.

Punishing perpetrators of sexual assault has never been a priority and has often been dismissed as a “boys will be boys attitude,” Bangura said. But that must change, she said. Victims must not be ashamed to tell their stories. Perpetrators must be brought to justice. Countries must banish the practice. And long-standing attitudes must change.

“Our most important challenge is to change the attitudes and perceptions that lead to this crime, “she said. “Change has to start before the first shot is fired. If human rights are not respected during peacetime, they will be trampled during war. If women are seen as second-class citizens when there is no conflict, they will not be respected when there is unrest. The shame and stigma of this atrocity should be borne by the perpetrator, not the victim, but this will only happen when every sector of society speaks up.”

Bangura knows the task is daunting. Overcoming deep-seated practices won’t be easy to stop. But she remains optimistic that society is moving in the right direction.

“People ask me whether I become discouraged by the daunting task that I have been given,” she said. “My answer is absolutely not because I know from experience that nothing is impossible. I am the only child of a woman who had no formal education, and I come from a traditional family in which men were the heads of households and women were considered property.”

Expanding global access to testimonies of the Holocaust and other genocides