The Saban Research Institute of Children’s Hospital Los Angeles Annual Symposium, held on Feb. 21, focused on the promise of regenerative medicine and cellular therapies — from curing HIV to building organs such as kidneys and intestines.

The panel of speakers included investigators from Children’s Hospital Los Angeles, USC, Children’s Hospital of Philadelphia, the University of Colorado and City of Hope. Several of the presenters are also participants in USC Stem Cell, a collaborative, multidisciplinary initiative working to translate the potential of stem cell research to the clinical imperative of regenerative medicine.

Brent Polk, director of The Saban Research Institute and chair of pediatrics at the Keck School of Medicine of USC, welcomed speakers and guests.

“This is an exciting and fast-moving field,” he said, “where the promise of lifesaving stem cell therapy, organ regeneration and tissue engineering are quickly becoming a reality.” 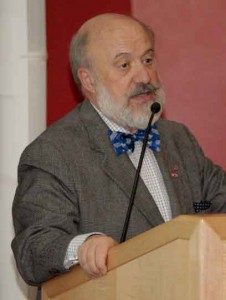 A highlight of the day was the presentation of the Pasadena Guild Endowed Chair in Developmental Biology and Regenerative Medicine to David Warburton, director of the Developmental Biology and Regenerative Medicine program at The Saban Research Institute, and professor of pediatrics and surgery at the Keck School. During the first keynote speech of the symposium, Warburton said, “The future doesn’t just happen. Someone has to go into the lab and invent it.”

The rest of the day was filled with talks by researchers who were doing exactly that. 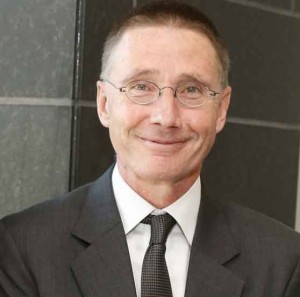 Andrew McMahon, keynote speaker and head of USC Stem Cell, announced a call for proposals for two free small molecule screens, which allow researchers to test the effectiveness of 3,000 potential drugs to treat various diseases. The screenings will take place at The Choi Family Therapeutic Screening Facility, located at the Eli and Edythe Broad Center for Regenerative Medicine and Stem Cell Research at USC.

McMahon also shared his research about the generation and regeneration of the kidney and its promise for preventing chronic kidney disease, a condition that affects one in 10 adults in the United States. As a key member of the USC Stem Cell Kidney Disease Team, he is collaborating with Laura Perin, from The Saban Research Institute, who spoke about the therapeutic potential of amniotic stem cell injections in treating these patients.

Another investigator dedicated to inventing the future is Scott Fraser, Provost Professor of Biological Sciences, Biomedical Engineering and Pediatrics at USC, and co-director of the new Translational Biomedical Imaging Lab (TBIL) at The Saban Research Institute. Fraser spoke about the goal of TBIL — to bring together clinicians and engineers, those who know what needs to be built and those who know how to build things — to create innovative, image-based solutions for challenges in medicine and the basic sciences.

Tracy Grikscheit, also from The Saban Institute and the Keck School, presented her remarkable early success in creating tissue-engineered human intestine, providing hope for premature infants and others with digestive tract problems.

Ellen Lien, from The Saban Institute and the Keck School, discussed her research about cardiac vasculature and heart regeneration after injury.

USC has received $25 million from The Broad Foundation to create the Broad Institute for Integrative Biology and Stem Cell Research at the Keck School of Medicine of USC.

A retreat from everything but stem cells

It wasn’t the pristine 27-hole course that drew more than 120 stem cell researchers from USC and beyond to the Desert Princess Golf Resort near Palm Springs.