Are you reading this article on a Samsung Galaxy smartphone? If so, you’re seeing this in color using technology developed at USC. One thing that sets Samsung phones apart from their competitors is their use of the organic light-emitting diode (OLED) display, as opposed to the liquid crystal displays (LCDs) found in other phones. 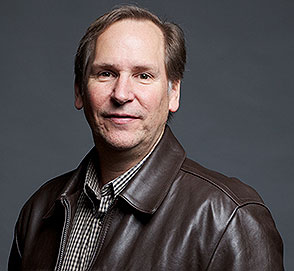 Each pixel in an OLED screen has three clusters of molecules — red, green and blue — that can be alternately energized to produce different colors. Energize the red molecules, and the pixel turns red. Energize the green ones, and it turns green. Energize the blue, and it turns blue. Energize a combination, and you get a corresponding shade on the color wheel.

“The system is more efficient than an LCD screen, which is backlit all the time, with individual pixels opening and closing like venetian blinds to let light of varying wavelengths — and therefore colors — through,” said Mark Thompson, a chemist at USC with joint appointments at the USC Dornsife College of Letters, Arts and Sciences and the USC Viterbi School of Enginering.

Thompson’s lab engineered both the red and green molecules, designing them to require as little energy as possible to illuminate. His molecules improved the efficiency of these mobile displays by a factor of four, improving the overall battery life and durability of the phones that use them.

“Our red and green are so efficient they could last for a decade, which is far longer than most people would consider keeping a smartphone,” Thompson said.

His lab patented the colors and then licensed them to the Universal Display Corp., which developed it further and licensed it to Samsung for their Galaxy line of phones — the top-selling smartphone worldwide.

For the past couple years, sales have been neck-and-neck with those of the iPhone. One model, the Galaxy Note 3 sold 10 million units (a benchmark figure in the industry) within just two months and by itself approaches 50 percent of the sales of all iPhones combined. Samsung manufactures 10 million of the OLED displays with Thompson’s colors per month.

Next, Thompson and his team plan to tackle the blue molecules.

Thompson’s work is an example of convergent science, named for its place at the intersection of the physical and life sciences with engineering. Studies of basic science of inorganic materials created revolutionary emitting molecules, which were incorporated into specially engineered light-emitting devices, leading ultimately to next-generation displays.

Convergent science is a major research focus at USC, where traditional disciplines coupled with state-of-the-art technologies yield new breakthroughs. A future hub for convergent research will be the USC Michelson Center for Convergent Bioscience, which will unite engineering and the life sciences.

Monitor the Air – With a Smartphone

USC Viterbi School of Engineering researchers have found a way to combine smartphone resources with a novel application that allows the phones’ users to help monitor air quality.

Looking for a campus map, schedule of events and compilation of photos all in one place? USC Campus Activities has just the app for you.

While the public’s yearning for health news and information can be seen in the popularity of such TV shows as The Doctors and Web sites such as WebMD, these outlets only hint at the possibilities that technology will have on health care in the near future, according to Maryalice Jordan-Marsh, a professor at the USC School of Social Work.