Marc Green adjusts the OMX, which can generate 3-D images of objects at the nanometer scale. (USC Photo/Robert Perkins)

Thanks to an interdisciplinary, cross-campus effort, USC is now home to one of the most advanced microscopes in the world — a device that pushes beyond what was once believed to be the boundary of visible light imaging.

The new GE DeltaVision OMX Blaze can generate 3-D images of objects at the nanometer scale, showing crisp details about the structures of cells. Only 58 of these super-resolution microscopes exist in the world, and USC’s is the only one in Los Angeles.

“This microscope lends support to USC’s growth in convergent bioscience,” said Randolph Hall, vice president of research at USC. “Our technology will enable life science discoveries and will lead to new medical devices, materials and therapies designed with incredible precision.”

The new microscope’s future home will be the newly announced USC Michelson Center for Convergent Bioscience, funded in part by a $50 million gift from philanthropist and retired orthopaedic spinal surgeon Gary K. Michelson and his wife, Alya Michelson.

For now, the OMX resides at the USC Center for Electron Microscopy and Microanalysis (CEMMA) near Zumburge Hall on the University Park Campus. It is a shared core instrument. Marc Green, research lab technician at CEMMA, offers training sessions for new users, who can utilize the facility for a modest recharge fee. The cost varies depending on the level of support required and whether the user is associated with USC.

“We’re keeping the recharge rate low to make this facility as budget-friendly to researchers as possible,” Forsburg said.

High-res detail is invaluable for researchers

The microscope can generate crisp images of objects that are just a few nanometers across — the size of organelles within a cell. Though its ability to take images of living cells with little damage gives it obvious value for biologists, engineers and physical scientists will also find the microscope useful.

“The ability to see dynamic, high-resolution detail in samples is invaluable to those of us who are working to develop bio-inspired and smart materials,” Malmstadt said. 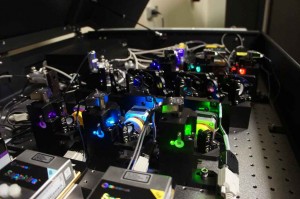 Under the hood of the OMX are six different colored lasers. (USC Photo/Robert Perkins)

Like other such devices, the OMX uses lasers to excite special fluorescent molecules that scientists embed within the object that they wish to image, creating a point of light that can be detected by the microscope.

But no matter how precisely you create a point of light, the fact that it has to pass through a lens — the lens of your eye, the lens of a microscope — means that it will suffer from some sort of diffraction, creating a blurriness around the point’s edges.

That’s where the OMX is different. It gets around the diffraction limit by collecting additional images. These contain interference patterns generated from illuminating the sample through multiple rotating grid patterns (like the Moiré patterns).

By analyzing these multiple images with high-powered computer processors, a combined image is generated that pins down, in three-dimensional space, exactly where that point of light is. The resulting images — made up of countless, precisely located points of light — are far sharper than the typical confocal or wide-field deconvolution microscopes in use in USC labs.

The OMX can be used with live cells

With six lasers, scientists can also use differently colored fluorescent probes for different parts of an object that they want to image — creating a composite image that can be stripped down to individual colors simply by adjusting filters.

And while the laws of physics dictate that an electron microscope, which creates images using electron beams rather than photon beams, will always be able to create images of smaller objects than light microscopes, the OMX has the advantage of being able to image living cells.

“With an electron microscope, you have to use a harsh, chemical fixation process to prepare your samples, which kills the cells,” Forsburg said. “This is suitable for analysis of some cellular structures, but inevitably disrupts or damages others.”

In contrast, the OMX can be used with live cells and does not require any special sample preparation process, she said.

“This is a plug-and-play system. You don’t have to specially prepare samples to use in this device — all of your old samples from other light-microscope experiments will work just fine,” Forsburg said. Adding to its value, the versatile OMX can also be used in a “standard” mode as a widefield deconvolution microscope, without the super-resolution component.

One of the early adopters to use the new microscope is Moh El-Naggar, assistant professor at USC Dornsife, who was a recipient of the 2012 Presidential Early Career Award for Scientists and Engineers. His research explores structures known as “bacterial nanowires” — nanoscale filmaents sent out by bacteria to transport electrons to external surfaces.

“So far we have been limited to either high-resolution electron microscopy techniques with nonliving bacteria or low-resolution live cell fluorescent techniques,” El-Naggar said. “We no longer have to choose between in vivo and nanoscale resolution. The OMX is the perfect balance.”

By becoming the home to cutting-edge technology, USC will have the opportunity to influence future iterations of that technology.

“The ‘X’ in ‘OMX’ actually stands for ‘eXperimental,’ which fits perfectly with our attitude of not only being an end-user, but contributing unique applications and even developing new imaging schemes based on this technology,” El-Naggar said.

Researchers interested in using the new OMX can schedule a training session with Marc Green at marcgree@usc.edu.

The power of scent: Turns out, the nose knows quite a lot

From aiding romance to communicating with God, scent has long been attributed near mystical abilities.