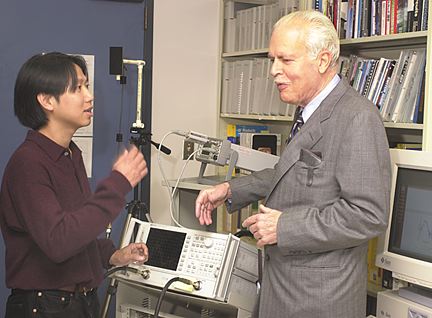 Most stories about Irving Reed begin with his rich intellectual legacy involving digital computers, the compact disc and other electronic devices. The implication is that Reed’s triumphs are all behind him, and that is not true.

And many stories make much of his childhood growing up in an Alaskan log cabin, which is not only true but also relevant.

“Growing up in Alaska, you learn to help the other guy because he helps you,” said Reed, a distinguished professor emeritus of electrical engineering-systems and computer science.

In 2003, Reed, 77, will mark 40 years at USC. He is still receiving accolades: a Millennium Medal last year from the Institute of Electrical and Electronic Engineers and a Distinguished Emeriti Award from the university in 1999. And he is still hard at work on mathematical questions and innovations in digital signal processing.

His past is legendary.

Irving Reed’s story really begins in France in May 1832, when a 20-year-old mathematical genius, Evariste Galois, was tragically killed in a duel so senseless that its cause is not known. In “Men of Mathematics,” author E.T. Bell described Galois’ last night alive:

All night long he had spent the fleeting hours feverishly dashing off his scientific last will and testament, writing against time to glean a few of the great things in his teeming mind before the death he saw could overtake him. Time after time he broke off to scribble in the margin “I have not time; I have not time,” and passed on to the next frantically scrawled outline. What he wrote in those last desperate hours before the dawn will keep generations of mathematicians busy for hundreds of years. He had found, once and for all, the true solution of a riddle which had tormented mathematicians for centuries: under what conditions can an equation be solved?

This story is almost certainly a serious embellishment or outright fabrication by Bell, although it has become a beloved legend among mathematicians. Nevertheless, it was true enough to a young boy reading in an Alaskan log cabin.

A mathematical prodigy, Reed entered the University of Alaska at 16 and soon transferred to Caltech. He graduated. He joined the Navy and worked on radar systems. He returned to Caltech for graduate studies. He worked in the aerospace industry and at MIT’s Lincoln Laboratory, while building some of the first digital computers.

This was a time when electronic messages were expressed in analog form, following smooth, continuous curves. A singing voice in analog becomes an electrical signal that continuously varies according to pitch and volume. Analog is accurate but not very robust. When analog messages are transmitted or copied, some of the data usually disappears.

In contrast, a digital electronic message turns data into a string of ones and zeros – binary numbers, or bits – which makes messages easier to manipulate. Early digital engineers experimented with ways to package digital messages to survive the real world of static and distortion. These schemes consisted of adding bits of data in a known mathematical code so that if some bits got lost in transit or distorted, the message could be reconstructed based on what was missing from the known code.

In 1960, Reed came up with what many consider to be the very best error-correcting code. He and a young mathematician, Gustave Solomon, reached all the way back to Galois’ pure and elegant mathematics to formulate the Reed-Solomon, or R-S, error-correcting codes. Because digital technology was in its infancy, R-S codes for a long time remained something that engineers studied and admired.

Years passed. Then one day, Voyager and Mariner spacecraft beamed faint streams of electronic data through millions of miles of space from the far reaches of the solar system back to Earth. Although the signals were exposed to horrific interference, the R-S codes enabled them to be reconstructed so that people saw dramatic images of Jupiter, Saturn, Neptune and Uranus that were as crisp and clear as those recorded by the deep space camera.

R-S codes became embedded in the burgeoning digital age. They were the algorithms that ensured that computers accurately read the data on disk drives, that fax machines received complete pictures and that the music played from a compact disc was pristine despite scratches.

Reed and Solomon hadn’t patented their codes, but so what. The 17-year patent would have expired before R-S codes could be commercialized.

In the early 1990s Reed did cash in on another of his mathematical ideas that was inspired by a graduate student, William Pratt.

“Pratt wanted to do his thesis on digitizing and compressing images,” said Reed, “so I set out to learn as much as I could about it.”

Pratt eventually went on to write one of the standard texts on the subject. Reed was partially inspired by helping Pratt with his dissertation and his much later book to devise a new mathematical algorithm for compressing images, satisfying himself that he “had found close to the best possible way to accomplish compression of images.”

That idea lay dormant for a decade until America Online learned that Reed’s method was faster than the JPEG standard. Two venture capitalists, one of whom was Reed’s son’s roommate at USC, approached the then-fledgling Internet company with the idea. Reed ended up with a block of AOL stock.

Only a small fraction of Reed’s time has involved projects that made money for him, or others. The bulk of his time has been spent teaching and guiding the dissertations of more than 60 graduate students and publishing more than 300 papers and books.

Today, nearing 80 with a hip that’s not wholly his own, Reed’s body has slowed but his brain hasn’t. While he has published continually, received the Hamming Gold Medal Award from the IEEE and is a member of the National Academy of Engineering, he is excited about his latest mathematical idea and patent, a method for improving digital cell phones to eliminate “dropouts,” or transmission failures.

Naturally, he’s convinced that he has come up with the best possible way of doing it.