Depression affects more than half of all mothers in Early Head Start programs, damaging their parenting abilities and increasing the possibility of their children having poor outcomes at school and in life.

Ferol Mennen, an associate professor at the USC School of Social Work, will use a new $2.5 million grant from the Administration for Children and Families to test a promising approach to alleviate that depression as a strategy to improve the lives of both mother and child.

“There are many clearly established negative outcomes for kids who have depressed moms,” Mennen said. “Intervening in the mother’s depression will of course improve her depression and make her more motivated to seek employment and improve her health, but we also think it will improve child outcomes.”

Mennen will work with Los Angeles-based Children’s Institute to test a group therapy approach to treating depressive symptoms and improving parenting skills among mothers in Head Start. The federal program offers early childhood education and parenting support to low-income families to improve the school readiness of children between infancy and 5 years of age.

A recent federal study found that 52 percent of mothers in Early Head Start programs experience some form of depression. Research has shown that maternal depression interferes with the ability of mothers to be responsive, nurturing parents and ultimately leads to long-term adverse outcomes for children.

“When mothers are depressed, their children do less well in school, and they are more likely to have trouble with aggression. It affects their friendships, and it affects their relationships with teachers,” said Todd Sosna, senior vice president for program evaluation and improvement at Children’s Institute, a nonprofit organization whose mission is to help children in Los Angeles County’s most challenged communities heal from the trauma of family and community violence, build the confidence and skills to break through the barriers of poverty and grow up to lead healthy, productive lives.

Mennen said depression can also increase the likelihood of heart disease, chronic pain and weight gain among mothers, in addition to affecting their interpersonal relationships with family members and friends. Those negative consequences spill over into the parenting domain, making mothers with depression more irritable and less able to address family issues.

“Maternal depression has been related to delayed acquisition of language, slower cognitive development in infants, more difficult temperament and more externalizing of problems in children,” she said. “Mothers who are depressed just tend to have more difficulty with parenting.”

Mennen and her research team will test whether interpersonal therapy for groups, known as IPT-G, reduces or eliminates those negative effects. The intervention has been tested in randomized trials and shown to reduce postpartum depression, but it has never been tested with mothers in Head Start programs.

Participants in IPT-G engage in group discussions designed to help them understand and change their relationships with key people in their lives, including partners, children, family members, co-workers and friends. Role-playing exercises help them enhance their problem-solving and social communication skills.

“When people are depressed, their hopefulness, their expectations of success, and their appraisal of their own skills and esteem are all diminished,” Sosna said. “They tend to isolate themselves from people in their lives and tend to think people don’t want to be around them or don’t like them. They have a hopeless, helpless, worthless kind of internal dialogue.”

IPT-G challenges those internal assumptions and helps participants embrace interactions with others. The negative responses they expected often end up being very positive, Sosna said, improving self-esteem and providing more sources of social support that enhance their general well-being.

Potential participants for the interventions

The intervention will be delivered to a randomized sample of 60 mothers in Head Start programs overseen by Children’s Institute; a separate group of 60 women receiving standard Head Start services will serve as a comparison sample. Scott Stuart, a national expert in IPT-G, will train mental health therapists to lead the therapy sessions.

“The advantage of the intervention is that it is relatively short term, about 16 to 20 weeks,” Mennen said. “It is also a group intervention, which means it is low cost, and we could possibly replicate it in other Head Start programs throughout the country.”

Head Start family support workers will screen all mothers entering Head Start during the initial stages of the study to locate potential participants. To be eligible, women must exhibit symptoms indicative of depression based on clinical cutoff points.

Testing for the full range of maternal depression is critical, Mennen said, because research has shown that even at low levels, depression can have negative effects.

“Depression is on a continuum,” Sosna said. “Some people have very severe and disabling depression, other people have significant depression but manage to go about much of their daily routine, and some people have milder forms of depression that still affect their patience or ability to interact with their children.”

By incorporating a standardized screening tool for depression, study leaders will not only be able to assess varying levels of maternal depression but also establish a better estimate of how many mothers in Head Start are affected by depressive disorders.

The therapy sessions will be held at selected Head Start centers on a weekly basis, and Sosna said Children’s Institute will provide dinner and child care to encourage regular participation by mothers. 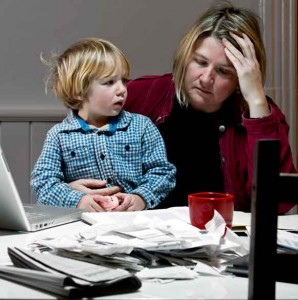 The USC School of Social Work will test a group therapy approach to treating depressive symptoms and improving parenting skills among mothers.

“One of the reasons parents who are depressed don’t get services that might be available through other service providers or clinics is because there are logistical barriers, financial barriers or child care barriers,” he said. “This is designed to be highly accessible, convenient and engaging.”

The research team will follow mothers involved in the study and their children for two years to evaluate effects of IPT-G over time, collecting data at five points in time to assess the intervention’s influence on issues such as maternal depression, parenting behaviors, parental employment and housing, interpersonal relationships, and child behavior and school readiness.

If the intervention proves effective at both reducing maternal depression and lessening its effects on child development and behavior, study leaders plan to educate other Head Start and early childhood education providers.

More than 1 million children are served by Head Start programs each year, Mennen noted, an indication of the impact this study could have on the health and well-being of low-income and vulnerable families throughout the United States.

“If this intervention is successful, we will begin disseminating it to other Head Start centers around the country,” she said, “and trying to convince them that one of the ways they can improve outcomes among their children is help mothers with depression.”

Study aims to help both mother and child