When American feminist and activist Gloria Steinem took the stage at a literary festival in India, in January, Jasneet Aulakh ’13 was there.

Traveling through India for nine months on a Fulbright Scholarship, Aulakh, who earned her bachelor’s in history, English and philosophy at the USC Dornsife College of Letters, Arts and Sciences, is interviewing elected women from a variety of socioeconomic, religious, partisan and caste backgrounds for her research into the role of women in village governments.

The daughter of Indian immigrants to the United States, Aulakh speaks Punjabi and Hindi.

Her research has allowed her to gain a deeper understanding of differences in the way feminism, women’s rights and political empowerment are expressed in India versus the United States. Her observations have led her to question the way in which Western standards of feminism are being applied to Indian women.

Aulakh is studying the effects of India’s 73rd Constitutional Amendment Act of 1993, which mandates that village governments reserve one-third of seats for women.

For her, the ruling carried particular personal resonance. She had been delighted when one of her aunts in India won a seat on her village government board, until she learned that the appointment was mainly intended to facilitate her uncle’s entry into local government — a practice known as a proxy vote.

“It’s easier for women to get these positions, so sometimes a man will put his wife’s name on the ballot and basically run the show himself and attend all the meetings,” Aulakh said.

Concerned the country was “just paying lip service to reforms for equality,” she set off for India determined to learn if anyone was dealing with these issues in a constructive way.

Since getting a chance to see for herself how the system works and to speak to the women involved, Aulakh’s viewpoint has evolved.

“I feel the existing research was overly critical in its expectations that a very Western idea of feminism would translate into these systems. Of the women voted into office, they were demanding ‘Why aren’t you doing this by yourself? Why aren’t you spearheading these programs by yourself?’ But the women themselves actually want a more collaborative experience with their husbands.

“I think many policies that motivated a central government to create this act were based on an elitist Western understanding of feminism, which seems to contrast with what women in the villages actually want — their own needs and goals.”

Many Indian women raising families are seen as being in a place of power, even if they also have a career, whereas in the West, we tend to value women who are more focused on the latter, Aulakh noted.

“It doesn’t mean that one is better than the other, rather that in India matriarchal roles remain very powerful,” she said. 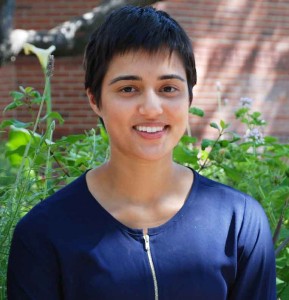 Aulakh is in India studying the effects of India’s 73rd Constitutional Amendment Act of 1993, which mandates that village governments reserve one-third of seats for women. (USC Photo/Laura Paisley)

Aulakh plans to turn her research into a study.

Next year she heads to the University of Oxford for a master’s degree in modern South Asian studies. She then plans to get a PhD in history and pursue a career in academia.

“USC Dornsife is a wonderful place to develop your interests,” Aulakh said. “The faith the professors put in their students is enough to take you anywhere.”

For the 2013-14 academic year, USC was one of the top producers of Fulbright Student Grant recipients among U.S. research institutions, according to the Fulbright Program, the government’s international educational exchange program.

The top Fulbright-producing institutions were highlighted in the Oct. 28 edition of The Chronicle of Higher Education.

“This latest distinction indicates USC’s continuing ascent as a global university,” Executive Vice Provost Michael Quick said. “We are pleased to see our students applying their talents worldwide through the Fulbright program, and we hope to see many more participate in the future.”

Twelve current and recently graduated USC students received 2013-14 Fulbright awards to study, conduct research or teach English for one academic year in one of more than 150 participating countries around the world.