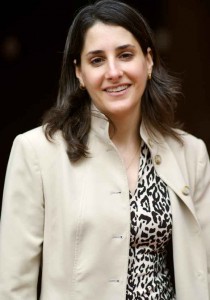 Better qualified than anyone to judge effective science outreach, the leading society for public engagement with science presented one of its signature honors to a young USC professor Feb. 14 in Chicago.

Mary Helen Immordino-Yang, assistant professor of neuroscience, psychology and education, received the Early Career Award for Public Engagement with Science from Nobel laureate Phillip Sharp, president of the American Association for the Advancement of Science (AAAS), at the group’s annual meeting.

The award is one of a handful bestowed each year by AAAS and the one perhaps most closely aligned with its mission: advancing science and serving society.

The society honored Immordino-Yang “for her sustained commitment and novel approach to integrating public engagement with science into her extensive research and scholarly activities.”

“She weaves outreach seamlessly into her scholarly practice,” Sharp said in presenting the award.

Immordino-Yang is unusual in arranging for separate talks to educators and public audiences whenever she is invited to present at an academic meeting. She spent the day of the award ceremony discussing her work at a Chicago school.

She also engages students at K-12 schools near USC through internships and visits to her laboratory, meeting with every young participant in her research studies to discuss their results, as well as their college plans and potential interest in science or engineering.

An accomplished scientist, Immordino-Yang received the 2012 National Science Foundation Career Award, the “Honor Coin” of the U.S. Army for her applied neuroscience research and the 2010 Cozzarelli Prize of the prestigious journal Proceedings of the National Academy of Sciences, which is given to studies reflecting scientific excellence and originality.

Immordino-Yang thanked Sharp and the society and stressed the importance of outreach: “If you think about the main aim of the AAAS, to try to promote science for the future, one of the most important ways we can do this is to help young people to think better so that they later can grow up to be innovative scientists and innovators throughout society in all kinds of realms,” she said.

“This esteemed group joins more than 8,700 current fellows, who in a tradition stretching back to 1874, has been recognized for their special contributions to the advancement of science and engineering,” Sharp said.

Frank Gilliland, professor of environmental health at the Keck School of Medicine of USC, for outstanding contributions to the scientific understanding of how genetic, epigenetic and environmental factors contribute to asthma and other diseases of public health importance.

Rob McConnell, professor of environmental health at the Keck School, for meritorious contributions to advancing public health through the conduct of landmark epidemiological studies of effects of ambient air pollution in children.

Kenneth Nealson, professor of Earth sciences at USC Dornsife, for pioneering work in environmental microbiology, particularly the discovery of the regulatory mechanism quorum sensing and the isolation and identification of metal-reducing bacterium.

Nicos Petasis, holder of the Harold E. and Lillian M. Moulton Chair in Chemistry, professor of chemistry and pharmacology, and member of the Loker Hydrocarbon Research Institute at USC Dornsife, with joint appointments at the USC School of Pharmacy and Norris Comprehensive Cancer Center at the Keck School. He was elected for distinguished contributions to organic chemistry and biomedical sciences, with the discovery of novel synthetically useful reactions and new paradigms involving chemistry, biology and medicine.

Berislav Zlokovic, director of the Zilkha Neurogenetic Institute at the Keck School, for distinguished contributions toward a comprehensive understanding of the role of CNS microcirculation and blood-brain barrier in the pathogenesis of chronic neurodegenerative disorders, including Alzheimer’s disease.

Petasis and Zlokovic attended the induction ceremony and received a certificate and a gold and blue rosette pin symbolizing science and engineering.

The 180th AAAS annual meeting, held Feb. 13-17 in Chicago, brought together scientists from every field, policymakers, journalists and members of the public. AAAS is the world’s largest general scientific society and is the publisher of the journal Science, the most widely circulated peer-reviewed scientific journal.

The world’s largest general scientific society elects USC faculty members as Fellows for significant advancements in their fields. The honor bestowed upon scholars by their peers has been a tradition since 1874.

Eight USC professors have been named fellows of the American Association for the Advancement of Science (AAAS) in recognition of distinguished accomplishments in advancing science and serving society.