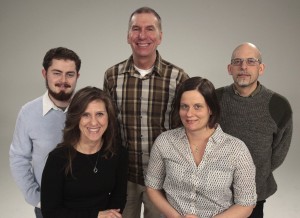 A team of reporters from the Milwaukee Journal Sentinel has been awarded the Selden Ring Award for Investigative Reporting for “Deadly Delays,” a series documenting how delays at hospitals across the country undermine newborn screening programs, putting babies at risk of disability and death.

The $35,000 annual award, which has been presented for the past 25 years by the School of Journalism at the USC Annenberg School for Communication and Journalism, honors the year’s outstanding work in investigative journalism that led to direct results. The team, which was comprised of reporters Ellen Gabler, John Fauber and Mark Johnson, photojournalist Kristyna Wentz-Graff and news application developer Allan James Vestal was recognized for its special report detailing the consequences of delayed tests to screen newborns for genetic disorders.

“Deadly Delays” shed light on the nation’s newborn screening programs that depend on speed and science to save babies from rare diseases. But, according to the series’ findings, “thousands of hospitals fall short, deadly delays are ignored and failures are hidden from public view — while babies and their families suffer.”

The team interwove a “rock-solid foundation of data with powerful human detail,” according to the competition’s judges. “They found that hundreds of thousands of tests arrive late at labs nationwide, with sometimes devastating consequences.” The jury also hailed the group for making hospital data available online that “allows readers to check their hospitals — a hugely valuable public service.”

In addition, the judges cited the powerful impact of the six-month long investigation as “… dozens of states [have] changed their process for dealing with infant screening and have cut waiting times. Arizona, for example, which had been one of the poorest-performing states, completely overhauled its screening program.”

Milwaukee Journal Sentinel Editor Martin Kaiser said that the reporting and outcomes of “Deadly Delays” is at the core of not just good journalism, but also what the Selden Ring award itself represents.

“Saving the lives of babies or keeping them from a lifetime of disability makes a difference, which is what the Selden Ring Award is all about,” he said. “It’s not just about the investigative reporting, it’s demonstrating how that reporting made an impact. What did it accomplish? And that’s what makes winning this award even more special.”

The Washington Post coverage of National Security Agency surveillance programs was the runner-up for this year’s award. The judges commended the newspaper’s stories, based on materials from Edward Snowden for their “considerable original reporting, [which] laid bare the government’s surveillance of the electronic communications of millions of Americans. The coverage was courageous, enterprising and notable for its lucid explanation of complex technical matters and how they bear on the privacy and security of Americans. It has provoked an international debate about privacy and government surveillance that continues.”

The judges combed through 61 entries from newspapers, nonprofit newsrooms and alternative weeklies, which, according to their comments, “showed once again that investigative work of consequence and ambition is being done around the country.”

“As institutions — whether they’re nonprofit, corporate or governmental — grow more powerful, the role of journalists in holding them accountable becomes increasingly important,” USC Annenberg’s School of Journalism Director Michael Parks said. “Using both data analyses and face-to-face reporting, the Milwaukee Journal Sentinel performed a national service in showing the human cost of the delays in vital blood tests of newborn babies. Most importantly, its solutions-oriented work led to significant improvements.”