A Keck Medicine of USC-led team of microbiologists has identified previously unknown interactions between critical proteins in the human immune response system, uncovering two independent regulatory mechanisms that keep the body’s immune response in check. The findings appear in the February edition of Cell Host & Microbe, the top peer-reviewed scientific journal that focuses on the study of cell-pathogen interaction.

“The body’s response to infection consists of a complex network of biological processes set off by the intrusion of disease-causing microbes,” said Qiming Liang, USC postdoctoral fellow and study co-author. “This is a powerful response that needs precise regulation to ensure that the host body is not harmed after the pathogen is destroyed.”

For this reason, the authors suggested that it is just as important to know what stops the body’s immune response as what activates it. Scientists do not yet fully understand this regulatory mechanism and continue to study it in hopes of harnessing its power to cure disease.

“We report that the direct interaction between the cGAS DNA sensor and the Beclin-1 autophagy protein shapes innate immune responses by regulating both the production of the cGAMP molecule and the process that destructs the microbial DNA,” said Gil Ju Seo, postdoctoral fellow and study co-author. “This is significant because the cGAMP molecule signals the production of inflammatory cytokines, which kill viruses and bacteria but can also harm the body if uncontrolled.” 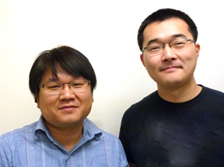 Led by Jae Jung, professor and chair of the Department of Molecular Microbiology and Immunology at the Keck School of Medicine of USC, the research team collaborated with the University of Illinois at Urbana-Champaign, the Howard Hughes Medical Institute, the Korea Advanced Institute of Science and Technology in Korea and Ludwig Maximilian University of Munich. Other Keck Medicine of USC authors included Youn Jung Choi, PhD candidate; Jianning Ge; Mary Rodgers; and Mude Shi, all of whom are part of Jung’s lab. Their work was supported by grants from the National Institutes of Health (grant numbers 1F32AI096698, CA82057, CA31363, CA115284, CA180779, DE023926, AI105809, AI073099, HL110609, AI083025), Hastings Foundation, Fletcher Jones Foundation, the Howard Hughes Medical Institute and the GRL Program (grant number K20815000001) from the National Research Foundation of Korea.

Economist Patrick Turley of USC Dornsife and a multinational group of researchers issue a special report that examines the benefits, risks and ethics of selecting embryos to ensure healthier, smarter children.

Gabriella Schultze has been dancing with a company in Salt Lake City by day while pursuing her USC Dornsife studies at night.

Two USC studies on diet and sperm quality in C. elegans illustrate how changes in the worm species could lay the groundwork for further research on human lifespan and reproduction.