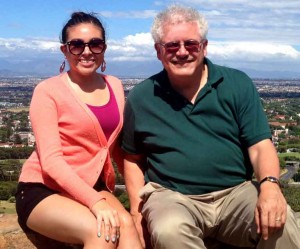 As a USC Mellon Mays fellow, I rang in the New Year by boarding a plane with fellows Rachel Jones and Adeel Mohammadi, and our mentor George Sanchez of the USC Dornsife College of Letters, Arts and Sciences.

We flew across the Atlantic Ocean and Africa and made our way to Cape Town, South Africa, for the Mellon Mays Undergraduate Fellowship program.   This marked the first time the Mellon Mays chapter at USC was invited to the conference.

Titled “Cape Town: City of Contrasts,” the conference offered us the opportunity to participate in lectures and discussions on issues of race and inequality in the city. We also had the chance to broaden our research as we engaged with other fellows and faculty from across the United States and South Africa.

My research project fit in well, as it deals with folk healing among Mexican-Americans living along the U.S.-Mexican border — another unique site of severe contrasts and political tension.

From Jan. 3 to 13, I was among more than 60 students from throughout the United States and South Africa who participated in several lectures and seminars at Sea Point, University of Cape Town, and the University of the Western Cape.

At the moment I arrived in Cape Town, I was captivated by its immense natural beauty and rich history. But my most memorable experiences came from meeting and engaging with young South African scholars.

Like myself, most of these young scholars were people of color born sometime between 1990 and 1993. The first few years of their lives were spent under apartheid legislation in South Africa. The personal insights and intellectual discussions these scholars brought to the discourse on race and inequality made the experience uniquely emotional and captivating for me and everyone involved.

Our conversations were particularly momentous as they took place in Cape Town less than a month after the death of Mandela, the country’s anti-apartheid revolutionary, who served as president from 1994 to 1999.

It was beautiful to see that regardless of political differences, the nation memorialized the revolutionary in murals and memorials across the city, affectionately referring to him by his Xhosa name, Madiba, or Tata (father in Xhosa).

Several conversations focused on the future of South African politics with particular focus on the upcoming elections and emerging parties in the National Assembly.

The academic discourse and group site visits across diverse ethnic and socioeconomic landscapes in Cape Town were almost overwhelming. I left the conference feeling refreshed, enlightened and captivated by poignant narratives surrounding race and ethnicity and their tense relationship with politics and social change, not only in South Africa, but across the world.

Through this unbelievable program, I engaged in critical scholarly discussions, establishing networks of future academics and leaders across the United States and South Africa. Most importantly, I forged beautiful friendships that renewed within me a sense of hope for my generation and those to come.

Anneleise Azúa is also a McNair Scholar. She is a senior majoring in gender studies at USC Dornsife and communication at the USC Annenberg School for Communication and Journalism.