A grassroots public education model that fielded a cadre of health mentors from two California counties significantly boosted Latino residents’ knowledge of everything from cholesterol and diabetes to the importance of nutrition and exercise, according to a study organized by the Southern California Clinical and Translational Science Institute (SC CTSI).

The SC CTSI collaborated on the study with the Keck School of Medicine of USC and Visión y Compromiso, an advocacy organization devoted to improving knowledge and access to health care for California’s native-born and immigrant Latino communities. Visión y Compromiso is also one of California’s leading proponents of the “promotor” model of community health education.

Promotoras are community members who act as health-oriented helpers and liaisons to their neighbors and communities. They are trained to provide culturally and linguistically relevant health information and help to people within their communities. As members of the community themselves, promotoras are able to leverage personal contacts, trust and respect to address sensitive topics, counter misinformation and advocate for quality care, according to advocates.

During the SC CTSI project, the study team trained 25 promotoras in a heart-health curriculum called “Su Corazón, Su Vida.” The evidence-based curriculum was developed by the National Institutes of Health’s National Heart, Lung, and Blood Institute to address health disparities in underserved and minority communities.

The promotoras then organized 11-week heart-health courses based on the curriculum, involving Latinos who lived in their communities in urban Los Angeles County and rural Kern County. The study was designed to explore the value of the promotora model in reducing the disproportionately high rates of heart disease and other health concerns among Latinos in those communities.

By the time the study was completed, promotoras had engaged a total of 730 residents in 49 workshops between the two counties studied.

Based on data gathered through questionnaires administered at the start and completion of the courses, investigators found that residents who took the workshops improved in several areas of lifestyle and health knowledge, such as causes and effects of diabetes, as well as cooking habits and frequency of exercise.

Representatives of the study team from SC CTSI, the Keck School and Vision y Compromiso recently reviewed the findings at a community forum in Los Angeles. Present were several promotoras who took part in the study, as well as community health care professionals, other community-based organizations and clinical researchers from USC.

Clinical health research is increasingly focused on improvements in the delivery of health education and health care to underserved groups and communities, said principal investigator Lourdes Baezconde-Garbanati, professor at the Institute for Health Promotion and Disease Prevention Research at the the Keck School. 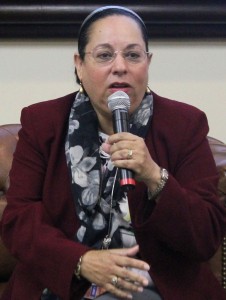 “It’s not just public health professionals who can improve health and reduce disparities in communities that aren’t adequately served by the existing health delivery structure,” Baezconde-Garbanati said. “Promotoras save people’s lives and prevent illness because they have access and trust within the community that others don’t. I’ve been in academia 20 years and I don’t have the access promotoras have.”

The success of the program depended largely on the promotoras themselves, who held workshops at churches, schools, community centers, parks, homes — anywhere they could.

“All of the promotoras had to act independently and solve problems on their own,” said Victoria Mercel, who served as a promotora in Los Angeles in the study. “It was a mission for us: We know these people and these families, and that is part of the knowledge we draw from.”

Promotora Maricela Sanchez, of Bakersfield, Calif., conducted many of her workshops in schools and in churches. But because many people in rural Bakersfield work in agriculture, Sanchez also held workshops in the fields and adapted the schedule to accommodate crop seasons.

“Many times people in the community wait to learn about this kind of information until they’re already sick,” Sanchez said. “That’s why it’s so important we get it to them.”

While Visión y Compromiso has focused its efforts on helping Latinos in California, advocates said the promotora model can continue to be deployed in other areas and populations.

“We’ve been excited to take part in this project to show how promotoras can deliver an evidence-based curriculum that makes such an important difference in preventing chronic and serious illness,” said Melinda Cordero-Bárzaga, associate director of Visión y Compromiso. “Local health care providers and organizations don’t generally have the resources to expand their capacity to reach more people in different communities, so the promotora model is an efficient way to fill this critical educational need.”

‘Longevity diet’ characteristics: What (and when) to eat for a long life

USC Professor Valter Longo and a colleague describe the “longevity diet,” a way of eating that considers food composition and calorie intake as well as the length and frequency of fasting.