For a long stretch of time, Carolina Caycedo was an artist with no money. However, it wasn’t for the reasons one might assume.

Caycedo, currently an MFA candidate at the USC Roski School of Art and Design, had supported herself through on-and-off bartering for seven years. The project, dubbed Daytoday, entailed Caycedo exchanging objects and services like haircuts, video lessons and homemade baby food for books, movie tickets or a bed for the night. Caycedo believes that bartering is as much of a social transaction as an economic one — and that the value we place on objects or situations can go beyond the monetary.

“Daytoday was a project very much built on trust and how to revalue a situation, an object or a service,” she said. “That’s part of the exchange.”

Caycedo, who was born in London and raised in Colombia, first explored the notion of bartering while attending art school in Bogotá. As part of the Cambalache Collective, she established the “Street Museum,” where passersby could swap their items. The street recyclers of Bogotá, who routinely scoured the city looking for trash they could salvage and sell, heavily influenced the project’s concept.

“When a system or a government leaves gaps, then people find creative ways to fill those gaps and provide for themselves,” Caycedo said. “In the streets of Bogotá, there were all these alternative economies. The people were literally living from the rubbish.”

Caycedo’s sustained personal bartering projects caught the attention of multiple art institutions, including the Secession in Vienna, the 2006 Whitney Biennial in New York and the now-defunct g727 Gallery, which invited Caycedo to do Daytoday in Los Angeles. When she arrived in L.A. for the first time in 2009 to complete the project, Caycedo fell in love with the city.

“I found a rich fabric of community organizing and alternative cultural events, and I could speak Spanish at any corner,” Caycedo said. “Also, the utopian thinking in California is very strong, and people are more ecologically conscious.”

While Caycedo was in L.A., a friend introduced her to the USC Roski MFA program, which immediately attracted her with its intimate size and generous funding. Now in her second year of the program, Caycedo said she finds the program’s unique position within a research university particularly valuable.

“Being here has helped me to be more thoughtful with my artistic decisions and more vigorous with my research,” Caycedo said. “The level of critique and questioning of your process from professors and peers is so important to your career as an artist.”

Caycedo’s current research project, Be Dammed, has led to numerous exhibitions, performances and case studies. Her interest in dams first piqued in 2012, when she heard about El Quimbo, the controversial construction of a hydroelectric dam in Colombia’s Magdalena River. To aid construction, the transnational responsible for the dam had to artificially divert the river’s course — as well as displace local communities.

“The damming is an act of repression of many kinds of bodies,” Caycedo said. “I’m thinking about how to use the dam as a wall to bounce off other ideas of social control in everyday life. What are the dams that hold us back?”

Caycedo explored that notion in several iterations, which included an exhibition at the DAAD Galerie in Berlin, where Caycedo participated in the prestigious Artist-in-Berlin residency in 2012. She also did a performance collaboration called Beyond Control as part of her residency at the 18th Street Art Center in Santa Monica, Calif. Both exhibitions highlighted the correlation between the physical containment of bodies of water and social bodies, including crowds, riots or even an individual. 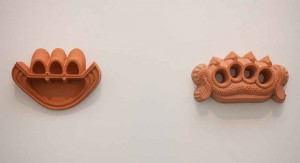 In one piece, two concrete reliefs titled “Triple Arched Knuckle” show the striking resemblance between the arched Linachtal dam in Germany and a knuckle duster (comparable to brass knuckles) used in the past by the Chilean military. In another sculptural piece, two concrete plinths bear satellite images of destroyed Colombian landscape.

“The territory is not only about geography,” Caycedo said. “It implies the spiritual connection to the water and the reclaiming of that piece of earth in a long history of indigenous struggle.”

Caycedo plans to continue her dam research and projects for at least several more years. In December, she received a grant from the Prince Claus Fund for the “Rethinking Public Space” collaboration, which she will use this fall to develop a site-specific project at the Magdalena River. Caycedo said that she intends for her project to support the well-organized efforts already taking place in Colombia.

“It’s a great learning opportunity for me to understand the rural communities’ level of resistance and commitment to a life full of dignity,” she said. “I’m happy if there’s social justice.”