Naomi Levine has taken 20 cruises off the Bermudas, but she spent no time lounging by the pool. These were research trips as a doctoral student to collect photoplankton and bacteria, among other microscopic organisms. Her goal was to measure how these organisms were being impacted by climate change.

“It was pretty grueling,” she said. “Especially when you are working 18 to 24 hours a day, trying to take meticulous, careful measurements on a diesel ship that is constantly rocking.”

She applies the modeling techniques she used in the Amazon to her ocean research, measuring rates of growth in photoplankton and bacteria and how they alter with changes in temperature, pH or light stress.

“We are trying to understand whether certain organisms have coping mechanisms that allow them to better survive and out-compete others in future climates,” she said.

‘DMS is a pretty cool gas’

“DMS is a pretty cool gas because it is produced by these organisms at the surface of the ocean and is then released into the atmosphere where it goes through a series of reactions, becoming microscopic particles on which clouds form,” Levine said. “So the more of this gas is released, the more clouds form. And the more clouds in the atmosphere, the cooler the surface of the earth.

“So we are trying to understand if this gas production produces an offset in changes in climate.”

Levine noted that until scientists understand why these organisms are producing this gas, it is difficult to predict whether they will produce more gas in warmer climates or if they will produce less. Producing less could have the opposite effect and actually increase temperatures.

“We plan to build better computer models, which will allow us to capture why and how the organisms are making this gas,” she said. “This will allow us to predict how much of this gas will be produced in the future. So that helps us better predict expected temperature changes.”

Levine’s research was the first to show that bacteria produced significant amounts of DMS in the natural environment.

“My work showed that, especially at the end of the summer, a significant portion of the production of this gas is coming from bacteria, rather than photosynthetic organisms,” she said.

Levine, who holds a bachelor’s in geosciences from Princeton University and a PhD in chemical oceanography from the Massachusetts Institute of Technology (MIT)-Woods Hole Oceanographic Institute Joint Program, did her postdoctoral fellowship at Harvard University. She was a National Oceanic and Atmospheric Association climate and global change postdoctoral fellow.

Levine said she was drawn to USC Dornsife by the quality of its marine environmental biology department.

“I’m excited to work with forward-thinking colleagues who are doing such innovative, cutting-edge interdisciplinary research,” she said. “The energy and enthusiasm and the progressive, innovative thinking really stood out in this department.” 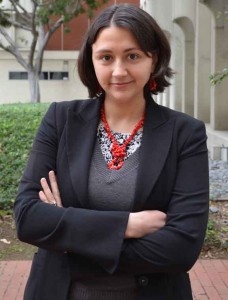 Marinescu is researching the synthesis of novel inorganic materials and how they can be used to convert solar energy.

“Energy harvested directly from sunlight offers a desirable approach toward fulfilling the global need for clean energy,” she said. “Collecting and storing solar energy in chemical bonds, as nature accomplishes through photosynthesis, is a highly appealing strategy to solving the energy challenge.”

Born in Romania, Marinescu earned a bachelor’s of science degree from the California Institute of Technology (Caltech), where she researched organometallic and organic chemistry. After earning her PhD from MIT in 2011, she returned to Caltech to work as a National Science Foundation Center for Chemical Innovation postdoctoral fellow.

At USC Dornsife, Marinescu focuses on the development of practical systems to facilitate the conversion of water or carbon dioxide into fuels.

“My previous work in the energy area has focused primarily on fundamental studies,” she said. “In my work at USC, I would like to combine fundamental and practical aspects to develop systems that could be directly applied to catalysis for solar energy conversion. This will require new catalysts that are stable, active and inexpensive,” she said. “These are challenging goals, but we are eager to work in an exciting area with broad potential benefits for society.”

Marinescu said she particularly appreciates the collegial and collaborative approach of the chemistry department.

“I am very excited to work in a supportive environment with a world-class group of highly active researchers,” she said. “The core research facilities at USC Dornsife provide the state-of-the-art instrumentation necessary to characterize our new materials at the molecular level,” she said. “The department fosters collaborative work among researchers from diverse backgrounds. And, most importantly, students here are really enthusiastic about research.”

Leana Golubchik, professor of computer science and electrical engineering at the USC Viterbi School of Engineering, was instrumental in bringing the new faculty members on board. Golubchick is director of Women in Engineering and Science (WiSE).

“Professors Marinescu and Levine are both outstanding junior faculty members who show tremendous potential for making significant contributions to science within their respective fields,” Golubchik said.

“WiSE hopes to contribute to building an environment in which their research thrives. We want them to fully maximize their individual talents while acting as role models and mentors to our students and postdoctoral researchers.”

Two USC studies on diet and sperm quality in C. elegans illustrate how changes in the worm species could lay the groundwork for further research on human lifespan and reproduction.

Measuring the response to COVID-19 in diverse communities

Cross-campus research will examine why certain communities encourage behaviors like mask-wearing and social distancing more than others.