The trilogy, with its graphic depictions of sadomasochistic sex, has become a worldwide phenomenon since the first novel became the fastest-selling paperback of all time upon its publication in 2011, beating J.K. Rowling’s Harry Potter series.

Despite being universally lambasted by critics for its poor writing (“The E L, it is safe to assume, does not stand for English Literature,” quipped one reviewer in the Chicago Tribune), 90 million copies of the Fifty Shades series have been sold worldwide, and it has been translated into 52 languages. Ten movie studios sparred over winning the rights to the film adaptation. Last year, the first novel spent 30 weeks at the top of The New York Times bestseller list. James earned $95 million in 2013, making the former British television executive the highest paid author of the year, according to Forbes.

So why do these novels resonate with so many and what does the Fifty Shades phenomenon say about our society and the state of modern heterosexual relationships? 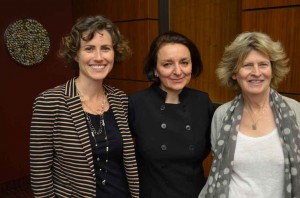 Celebrated sociologist Eva Illouz, author of the forthcoming Hard Core Romance: Fifty Shades of Grey, Bestsellers and Society, argues that the sadomasochistic aspect of the narrative is more than a graphic depiction of sex.

“The power of Fifty Shades of Grey is not only that it unfolds the contradictions, tensions and conundrums of heterosexuality, but that to the reader, it seems to actually provide the tools to make it better,” she told an audience at a recent Barbra Streisand Professor Lecture held at the Ronald Tutor Campus Center.

One of the main reasons for the series’ huge success is that readers are using it as self-help for a better romantic life, Illouz said.

“Fifty Shades of Grey seems to provide the solution to the problems of heterosexual relations through a narrative formula that gives the reader something to carry away,” she said. “In that sense that [for some readers] it is not at all a pornographic book but a self-help book.”

Illouz is professor of sociology at Jerusalem’s Hebrew Univeristy and the first female president of Bezalel Academy of Arts and Design, also in Jerusalem. She is the author of several books, including Cold Intimacies: The Making of Emotional Capitalism, Oprah Winfrey and the Glamour of Misery: An Essay on Popular Culture and Why Love Hurts: A Sociological Explanation.

“There is so much to admire about professor Illouz’s work, including the ease with which she thinks big and her willingness to criticize feminism, but always from a position within it,” Echols said.

The reasons for its success 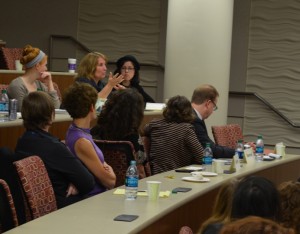 First written as fan fiction for followers of the popular vampire-themed Twilight novels, James originally uploaded her work — then called Master of the Universe — in serial installments.

“One of the most remarkable features of Fifty Shades of Grey is that its initial success happened under the radar of corporations and relied almost exclusively on a highly committed group of readers who interacted in the public sphere of the Internet,” Illouz said.

This interactive format allowed James to incorporate her readers’ feedback, including their own fantasies and desired plot twists, as she developed the story.

“This is a crucial feature of many aspects of contemporary culture and TV programs, where there is a complete blurring of the process of production and reception/consumption,” Illouz said.

From an economic point of view, an interactive format is efficient because it provides a built-in mechanism for marketing and audience research.

The tale of Anastasia Steele, a naive young college graduate, and the wealthy, powerful and sophisticated businessman Christian Grey, Fifty Shades is undoubtedly a woman’s novel, written by a woman, read by many women, marketed for women and more appreciated by women than men, Illouz said. It resonates with women, she argued, because it falls into a long tradition of Gothic romance, of which Charlotte Bronte’s Jane Eyre is a prime example.

“The 18th and 19th centuries romance novels,” she said, “have given expression to women’s search for love and matrimony in a pleasurable formula in which the heroine meets an attractive but dark and threatening man who later reveals himself to love her and be devoted to her.

“Fifty Shades is almost a caricature of the Gothic romance in its use of such familiar themes as the innocent and virtuous, but opinionated and intelligent, young woman who works for a rich man who behaves to her in a seemingly hurtful way,” she explained. “The novels reveal his tangled past and his secrets exactly as in Jane Eyre, his vulnerability and his uncompromised devotion to her.

“There is an originality and appeal in Fifty Shades vis-a-vis the conventional Gothic formula,” she said. “The series makes explicit the masochism that was left implicit in the traditional Gothic novel.”

The sadomasochistic relationship at the heart of the novel is appealing to readers for more complex reasons than one might realize. Writ large among them, according to Illouz, is the diffuse psychic suffering prevalent in modern romantic relationships and experienced through anxiety, uncertainty, ambivalence and boredom.

She noted that in the novels, Grey’s immense social and sexual power is matched only by his intense and permanent need for symbiosis, whereas Ana’s love is tempered by her own constant display of her need for her own autonomy.

“They are constantly fighting about that and ultimately these struggles are reconciled in their intense sadomasochistic sex, which reenacts their gender identities and stabilizes their differences,” Illouz said.

Finally, Illouz reiterated that the books owe much of their success to the fact that many readers are using them to improve their own romantic lives.