A scene from These Birds Walk, a documentary produced by Valentina Canavesio ’04, who earned her bachelor’s in international relations at the USC Dornsife College of Letters, Arts and Sciences, resonated with viewers.

Bathed in the golden hue of a few flickering candles, some boys lay barefooted on the cold stone-speckled floor. Huddled together, one asked, “Do you believe in God?” before they all whispered a prayer.

“I miss falling asleep with my brothers and sisters,” one boy said. 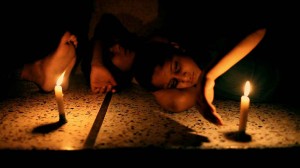 In a scene from These Birds Walk, boys sleep on the floor of an Edhi Foundation home in Pakistan, praying and talking about how much they miss their families. (Courtesy of Valentina Canavesio)

Outside, the faded sign half-covered with overgrown leafy branches declares in Arabic: Safe Home for Unknown and Abandoned Children.

The home for destitute and runaway children has stood in Karachi, Pakistan, since 1951.

The perils of returning boys to their homes

“These kids are young. They are lost,” said 86-year-old Abdul Sattar Edhi, who founded the home that grew into a foundation with more than 300 similar centers across Pakistan. “You must take them home.”

Often, however, returning these boys to their own homes requires traveling across deadly Taliban territory. Asad Ghori, once a runaway who took refuge at Edhi’s home, is the driver of the rusted ambulance that carries the children back to their families. 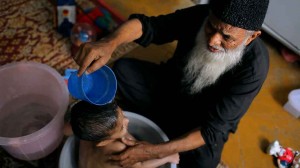 Abdul Sattar Edhi founded the children’s home that grew into a foundation with more than 300 similar centers across Pakistan. (Courtesy of Valentina Canavesio)

For Ghori, returning the children to the hands of their parents is often more disturbing than traveling through extremely dangerous territory.

Rafiullah was one such boy.

“If you drop me off now, they will start beating me right away,” Rafiullah said, crying in the back of the van.

“Look, no one is going to hurt you,” replied Ghori, who was driving. “I will speak to them. If you don’t feel safe, I won’t leave you there.”

Their arrival produced the documentary’s most chilling scene when one uncle said: “He would have been more use to us if you brought back his corpse.” Ghori then began negotiating to spare the boy from punishment.

Not shown in the film was the foundation’s talk with Rafiullah about going home.

“The Edhi Foundation has a policy that they will not release a child who does not want to go home,” Canavesio said. “So even if the parents come to get their children and the children don’t want to go, they won’t be released. But in the case of Rafiullah, off camera he said that he just missed his mother and his siblings, and he wanted to go back. One of the directors was trying to convince him to stay at the foundation, but he just missed his family too much.

“One of the paradoxes of these children is that they might come from very difficult backgrounds, but they are also programmed to love their families. That’s the overpowering feeling that arose.”

The camera’s close proximity to the boys creates intimacy; viewers feel as if they are right there with them.

The streets of Karachi

Another boy, 10-year-old Omar, who ran away from home and was picked up on the streets of Karachi, was also returned home. En route, the boy wanted to stop at a shrine and pray.

“They let him stop, but they told him don’t run,” Canavesio said. “And he started running and the cameraman just went after him.”

The spontaneous act became one of the most poignant moments in the film. When Omar took off, viewers could hear his breathing as he raced through people, perhaps trying to get to the altar.

When someone grabbed Omar, the small boy got away, saying, “Let go of me, let go of me!” Free, Omar darted up a flight of steps until he reached a praying area. He cupped his hands, open palms near his face, and began to pray.

“That was actually one of the goals of this film — to shoot in a way that wasn’t like a traditional documentary, but more like a cinema experience,” Canavesio said. “We wanted to portray these people in a way that wasn’t like other films, but more like personal experience. We wanted to hopefully generate more empathy for these people, and relate to them as individuals rather than statistics that you see in the news.”

The film, which earned a score of 100 percent fresh based on 25 reviews from Rotten Tomatoes, was directed by Omar Mullick, Canavesio’s husband, and Bassam Tariq. Both directors are of Pakistani descent. 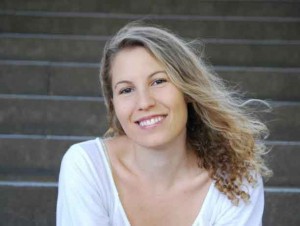 “Edhi has always been this figure that Pakistani mothers speak about; he is a very highly regarded figure in Pakistan,” said Canavesio, who grew up in Paris and is half French and half Italian. “Edhi is one of the rare people who is really trusted in Pakistan.”

Originally, the crew sought to produce a documentary about Edhi.

“They approached Edhi about doing a short film, a little biography, and when they got there, he threw a challenge at them that in order to know him they had to see his work and the people he serves,” she said of Mullick and Tariq. “They spent time in Edhi’s center for runaway boys and found the real story there.”

Founder and executive director of Ayoka Productions, Canavesio is now finishing her first feature documentary film as a director. That film is about the challenges of population growth and family planning from a global perspective. She said her background in international relations helps greatly with the kinds of films she produces.

She has experience working with nongovernmentals (NGOs) and the United Nations at their headquarters and in the field. She said she wants to combine her passion for social and political issues with the power of media.

“I thought initially I wanted to work in politics, but with a focus in international issues and human rights, so that’s how I got into IR,” she said.

Working around the world

She started as an intern at the United Nations while in graduate school at the Paris Institute of Political Studies in Paris. For the past nine years, she has worked as a producer.

“I actually just got back from Mali, where I was shooting a video for an NGO,” she said by phone from her home in New York. “I’ve worked for UNICEF in different places around the world, and humanitarian NGOs in the Democratic Republic of the Congo and elsewhere, trying to use the medium of film to highlight important issues.”

These Birds Walk highlights a compelling although at times heartbreaking group of people in Pakistan. Even the title that conjures bird imagery could be seen as a metaphor for these children not being given the wings to fly.

“But the title,” she said, “means different things to different people.”