Six news organizations from across the country joined the USC Annenberg School for Communication and Journalism to highlight how immigration status affects health in a series titled “Living in the Shadows.”

“We are extremely honored to have joined forces with the USC School of Communication and Journalism on this important topic — a topic that affects the immigrant community tremendously,” said Marco Flores, news director and West Coast regional director for Univisión. “This series goes beyond the issue of immigration reform laws. It is about the basic human right to health and well-being.”

The series, launched in January, also explores the high health and emotional costs of family separation due to deportation. It examines the instances when health care systems meet the need of the country’s immigrant and refugee population and when they fail them.

The health of immigrants has been shown to deteriorate as they spend more time in America. Does disadvantage make them sick? Or are some immigrants less healthy than they seem when they arrive? The series explores the implications of these questions, given that undocumented immigrants are excluded from both Medicaid and the new insurance subsidies available through the Affordable Care Act. 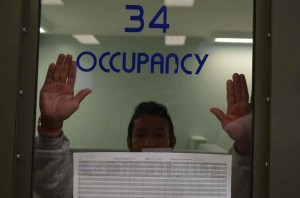 “Living in the Shadows” explores the personal costs of family separation due to deportation. (Photo/Alonso Yáñez, Univision KMEX 34)

“The health of immigrants increasingly will define the health of America,” said Michelle Levander, founder of the Reporting on Health Collaborative. “We are honored that these extraordinary journalists, reporting in English and Spanish and through broadcast, print and online storytelling, have joined together with the USC Annenberg School to bring attention to these important issues.

“Journalists can have a remarkable influence on the public discourse on critical issues, such as immigration, when they join together on collaborative projects such as this one,” she added.

“Living in the Shadows” was made possible through the leadership of editors from diverse outlets across the country, the support of The California Endowment and the efforts of Project Editor William Heisel, a former reporter for the Los Angeles Times and Orange County Register, Levander said.

The journalists and outlets in the Reporting on Health Collaborative connected with USC Annenberg as fellows in The California Endowment Health Journalism Fellowships.

Funded by The California Endowment, the program based at USC Annenberg provides a week of training on health issues, followed by six months of one-on-one mentoring on ambitious health journalism projects.

The stories published or broadcast in the series can be found in English or in Spanish. Readers can also connect with the project through its Facebook page.

USC Annenberg series looks at link between health and immigration