“If it’s not cool for a teenage boy in inner-city L.A. to do his science homework, then how will he ever become a brain surgeon?”

This thorny question was asked by Steve A. Kay, dean of the USC Dornsife College of Letters, Arts and Sciences as he introduced Daphna Oyserman, the new Dean’s Professor of Psychology, at Joyce Cammilleri Hall on Jan. 22.

Oyserman, professor of psychology, education and communication, has found answers to that question through her research on self, culture and motivation. She shared those results during the Dean’s Special Lecture, giving faculty and students across the university what Kay noted was “an opportunity to get a sneak preview of her paradigm-shifting, identity-based motivation theory.”

Titled “Identity Based Motivation: Why We Start Too Late, Do Too Little and What We Can Do About It,” Oyserman’s lecture focused on aspiration-attainment gaps — the shortfall between the self that one aspires to become and the outcomes one actually attains — and how situations can increase or decrease those outcomes. 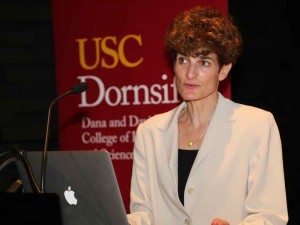 USC Dornsife’s Daphna Oyserman shares her research during a Dean’s Special Lecture, explaining why we often achieve less than we aspire to and offering solutions to help attain our goals. (USC Photo/Matt Meindl)

Oyserman, a former W.T. Grant Faculty Scholar and fellow at the Center for Advanced Studies in the Behavioral Sciences at Stanford University, as well as a Humboldt Prize recipient, holds a joint appointment with the USC Rossier School of Education and the USC Annenberg School for Communication and Journalism.

She will open the USC Dornsife Mind and Society Center upon the completion of the Verna and Peter Dauterive Hall, USC’s first interdisciplinary social sciences building.

“Daphna’s interdisciplinary approach to research — and capacity to translate theory into practice — is what makes me most excited to have her on board,” Kay said.

Oyserman’s lecture kicked off with a cartoon of a man gazing at his laptop when the grim reaper appears in the doorway. “Thank goodness you’re here,” the man says. “I can’t accomplish anything unless I have a deadline.”

“We have future goals, but somehow that future, unless it seems to be breathing down our neck, often feels like something we can handle tomorrow,” Oyserman said. “It’s not always apparent to us that there’s anything plausible we can do right now to attain our future goals.

“Often when we talk about identity, motivation and aspirations, it’s as if the three are clearly connected. Yet our everyday experience of how these things work is not of clear connection. Instead, we wait too long to get going,” Oyserman said. “And when we look at the amount of effort we put forth, it may not then be surprising that we don’t attain our goals.”

Research shows that young children typically have high aspirations for their future selves — whether they want to grow up to be an astronaut, a brain surgeon or a professional athlete. This is true even for children from disadvantaged backgrounds, the vast majority of whom aspire to a future of good jobs and higher education. Eighty-five percent of the nation’s 10th-grade students and 72 percent of children living in poverty plan to earn at least a bachelor’s degree.

However, many children and adults are stymied in attaining their dreams by an inability to envisage how to get there. For instance, among lowest-income level students, only 41 percent make it to college and only 10 percent graduate in six years.

“People believe they know who they are and that who they are directs their choices,” Oyserman said. “They tend to assume that the same process works for their future self, so if they have their goals in mind, they will act to obtain them.”

In reality, that’s not always the case.

“If the future goal is far away, difficult to attain or involves activities that seem identity-incongruent, then we often tend to behave as if there is no need to get going right now,” she said.

The good news is that each of these features is informed by contextual cues and can be changed.

Oyserman discovered that whether we are able to take the necessary steps to achieve our goals is dependent on how we relate the future to ourselves and how we react to encountering difficulty along the way.

She put her research to the test in low-performing schools by providing a seven-week intervention program she called “Schools-to-Jobs.” In each homeroom, approximately half of the students were randomly assigned to attend the regular elective period (control group) and half were assigned to attend the intervention as the elective period (experimental group). In “School-to-Jobs,” trainers engaged students in activities to make the future feel close, strategies feel identity-congruent and difficulty feel normal and indicative of importance.

For example, to make the future feel close, she asked students to draw a timeline into the future in one activity, and to link their next year and adult selves with activities they were doing now to attain their “next year selves.” To make difficulty feel normal rather than an indicator that school was not for them, she had students work together to solve puzzles that seemed impossible to everyone until they started step-by-step to consider what to do. Students not assigned to “School-to-Jobs” had classes as usual.

All children were then followed for two years with no further intervention. Before the intervention, the groups did not differ on any measure.

Moreover, these effects were mirrored in differences in unexcused absences, time spent on homework and in-class engagement versus disruptiveness. Children in the control group did not exhibit as much change in their “possible selves” and strategies to achieve them. As predicted by the theory, changes in behavior and grades were dependent on change in possible selves and strategies.

Oyserman has a book in production with Oxford University Press detailing identity-based motivation theory, the School-to-Jobs intervention on which it is based and the process by which it can be adapted for use in many settings.

In follow-up studies, Oyserman showed that low-income and minority students who understood the value of an education spent more time on homework and got better grades. Any student led to see education as the path leading to high salaries was more likely to turn in homework assignments.

She also addressed the gender achievement gap in which boys underperform compared to girls. She used the link between earnings as an adult and education to demonstrate that boys could be induced to work as hard in school as girls — if they saw their gender as likely to succeed.

Across studies, Oyserman demonstrated the surprising ease with which students’ current and ongoing effort can be improved by helping them feel that current choices are relevant to their future and that strategies like doing homework are things that they can do. They learn that difficulty inherent in schoolwork implies that it is worth their effort, rather than impossible.

Even teenage boys can come to understand that homework is cool.

In the fight against diseases like ALS, USC Viterbi biomedical engineering researchers have created a powerful lab model to better see how our muscles and neurons connect.

New assistant dean of diversity, equity and inclusion at USC Gould envisions a path to healing

Nickey Woods brings a background in educational psychology to the new position.

USC research indicates that those most at risk of hepatocellular carcinoma are men ages 60-69, non-Hispanic Blacks, American Indian/Alaskan Natives and residents of high-poverty areas.