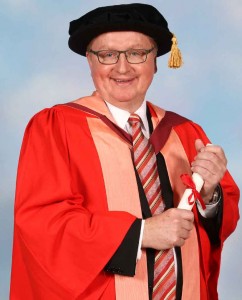 USC Dornsife Dean Steve A. Kay received an honorary degree from the University of Bristol. (Photo/Ede and Ravenscroft Photography Ltd)

A native of the British island of Jersey located off the coast of France, USC Dornsife College of Letters, Arts and Sciences Dean Steve A. Kay remembers arriving at the University of Bristol on the United Kingdom’s mainland as a wide-eyed 17-year-old.

Devoting much of his time to mathematics and physics classes as an undergraduate, he sometimes snuck out of a thermodynamics course to visit a linguistic philosophy class.

“At Bristol, I was encouraged to be intellectually courageous, to seek out subjects that would be challenging to me,” Kay recalled. “Now as dean of USC Dornsife, I strive to encourage our students to embrace this same entrepreneurial spirit.”

Toward the end of his undergraduate studies, Kay’s PhD adviser Trevor Griffiths convinced him to join a project striving to understand some fundamental aspects of photosynthesis. It was Griffiths’ excitement — the passion for his own research topic — that convinced Kay to remain at Bristol to earn his doctorate in biochemistry.

On Jan. 29, Kay returned to his alma mater to receive a Doctor of Science honoris causa.

“It was an incredible privilege to return to the University of Bristol for my third graduation,” he said. “I was thrilled when I received the letter from the vice chancellor informing me that I had been chosen to receive an honorary degree.”

Kay, along with five other honorees, including NASA administrator Charles Bolden MS ’77, were recognized for their outstanding achievements and distinctions in their fields. During the ceremony, an oration was delivered in commendation of each recipient.

Alistair Hetherington, holder of the Melville Wills Chair in Botany at Bristol, outlined how Kay seeks to understand the workings of the intricate intracellular machine, or clock, responsible for controlling circadian rhythms in plants, humans and microbes. Hetherington said Kay’s discoveries concerning the molecular components of the intracellular clock and how they work together were “truly groundbreaking.”

Hetherington noted Kay and his research team’s investigation into the ties between circadian rhythms and the body’s metabolism. This research helps to explain why night-shift workers, frequent travelers and others with disrupted circadian rhythms appear more prone to metabolic disorders. Kay’s lab discovered a chemical that regulates the human biological clock that in turn could be used to develop completely new drugs to treat metabolic disorders such as Type 2 diabetes.

Hetherington also highlighted Kay’s election to the National Academy of Sciences as well as his more than 200 published papers. He was also named among Science magazine’s “Breakthroughs of the Year” three times.

“His work is agenda-setting and he is, without doubt, a titan or indeed the titan of his field,” Hetherington said.