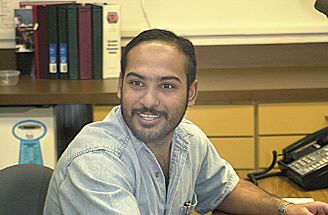 When a 7.9 earthquake hit western India last month, Jasspreet Singh and hundreds of other Indian students at USC immediately tried to contact their families by telephone, e-mail and fax machine. They even tried using shortwave radios.

But nothing seemed to work – at least for the first 12 hours.

Initially, Singh had no idea what section of India had been hit. The news simply said thousands had died or were trapped under rubble.

He eventually learned that the earthquake had struck western India, many miles from his parents’ home in the north. However, Singh was still concerned.

When he finally got through, more than a day later, he learned his relatives were safe.

This is one of the challenges of going to school so far away from home, Singh said. “You do feel disconnected, and then when something like this happens, you feel pretty desperate.”

Indian students are among USC’s largest international population, with nearly 600 students enrolled on campus this year. Singh, who is president of USC’s India Student Association, said no students lost relatives in the earthquake.

“It’s pretty fortunate,” he added. “Most of USC’s Indian students are from the area where the earthquake struck.”

An Earthquake Posed Challenges for International Students Far From Home