When Roméo Dallaire was young, his family lived in darkness.

Back then, post-traumatic stress disorder (PTSD) was not common knowledge. What Dallaire’s family did know, however, was that his father — an officer with the Canadian Army — had become an alcoholic, and “it was never predictable what we would find when we got home.”

Peace would only come on the nights his father could chat with his Army buddies.

“That night he would be serene — because he had had his therapy,” said Dallaire, a Canadian senator and retired lieutenant-general with the Canadian Army.

Speaking to more than 100 people at USC, Dallaire said that post-traumatic stress is an injury that requires urgent attention because its impact is felt by more than just the individual — primarily, by the families — and because it can become a terminal injury, leading to suicide.

“Our families are now living the missions with us,” he said. “When we send those members overseas and they come back with this injury, we can be causing casualties in their families.”

Anthony Hassan, director of the Center for Innovation and Research on Veterans & Military Families (CIR) at the USC School of Social Work, which hosted the event, added, “Families are often the first lines of defense when a veteran returns home, and it is imperative that we provide support services to the veteran as well as their families to increase the chances of a successful transition to civilian life.”

The support is key for this population because recent research from the USC School of Social Work shows that adolescents from military families are at a higher risk of feeling depressed, having suicidal thoughts and carrying weapons to school. 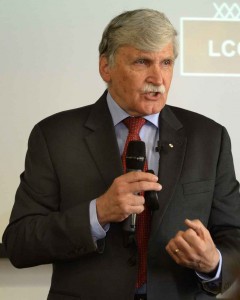 In 1993, Dallaire was appointed force commander of the United Nations Assistance Mission for Rwanda, where he saw the country descend into a genocide that killed more than 800,000 people. A few years later, he publicly admitted to suffering from PTSD. Since his retirement, he has continued to work on conflict prevention and mental health awareness, including in his current role as Canadian senator.

Despite recent gains, mental health treatment is still a stigmatized subject in the military culture. Dallaire said the Canadian government is working to address the issue by reframing it as “operational stress injuries.”

At USC, the School of Social Work and CIR enhance the well-being of veterans and military families by destigmatizing mental health treatment and training students to work with veteran and military populations by creating a culturally competent future workforce.

A reluctance to seek treatment could come as a detriment to the veteran and the entire military family.

“PTSD is not a sickness, and it’s not a disease. We’re not talking about something you might catch, but it can spread by its impact on people around it; it can be lifelong, and it can be terminal,” Dallaire said.

Bohnett fellow’s ultimate immersive learning experience: Working at the L.A. Board of Supervisors

Katrina Manrique’s interest in policies that better serve people in need of counseling and mental health resources was one of the reasons she applied for the 2022 David C. Bohnett Leadership Fellowship.

The Trauma Recovery Center at the USC Suzanne-Dworak-Peck School of Social Work is the first comprehensive victim recovery behavioral health clinic at the university.