Moh El-Naggar of the USC Dornsife College of Letters, Arts and Sciences first got an inkling he was being considered for a presidential award several months ago when he received an email requesting his permission to authorize an FBI background check.

But it wasn’t until two days before Christmas that the assistant professor of physics received an email from the White House officially informing him that he had been selected to receive the highest honor bestowed by the United States government on science and engineering professionals in the early stages of their independent research careers — the 2012 Presidential Early Career Award for Scientists and Engineers. (The announcement was delayed due to last year’s government shutdown.) 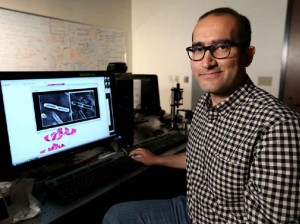 The breakthrough research of USC Dornsife’s Moh El-Naggar has earned him the highest honor bestowed by the United States government on science and engineering professionals in the early stage of their careers. (USC Photo/Matt Meindl)

“It’s exciting on two levels,” El-Naggar said. “A pat on the back is always nice, especially as this is the highest honor you can get at the early career level. And the award comes with a pretty substantial research grant of about a million dollars, which will allow us to continue our research and even expand into new areas.

“Plus,” he said with a grin inside his office at USC Dornsife’s Seaver Science Center, “I get a trip to the White House to meet the president.”

The award, established by President Bill Clinton in 1996, is coordinated by the U.S. Office of Science and Technology Policy within the Executive Office of the President. El-Naggar, who was nominated by the Air Force Office of Scientific Research that funds his research, is among 102 of the nation’s leading young scientists and engineers to receive this year’s honor. The winners will receive their awards at a Washington, D.C., ceremony in the coming year.

Awardees are selected for their pursuit of innovative research at the frontiers of science and technology. They are also chosen for their commitment to community service as demonstrated through scientific leadership, public education or community outreach.

“The impressive achievements of these early stage scientists and engineers are promising indicators of even greater successes ahead,” President Barack Obama said in a statement. “We are grateful for their commitment to generating the scientific and technical advancements that will ensure America’s global leadership for many years to come.”

A pioneer in energy conversion

As a biophysicist, El-Naggar is a pioneer in studying energy conversion and charge transmission at the interface between living cells and synthetic surfaces. He leads the NanoBio Lab at USC Dornsife, which focuses on the fundamentals, implications and technological applications of biological charge transfer, using environmental bacteria — which he calls “the champions of moving electrons” — as model systems.

El-Naggar’s work has important implications for cell physiology. It may lead to the development of new hybrid materials and renewable energy technologies that combine the exquisite biochemical control of nature with the synthetic building blocks of nanotechnology. This would mean huge payoffs in terms of reduced costs and increased versatility for both the energy and nanotechnology fields.

This grant will help him expand his research to investigate how the knowledge he has gained from studying bacteria may impact our understanding of human cells.

“If we understand the fundamentals of long-distance electron transport and cells in general and not just bacteria, then we can start thinking of exciting things like being able to interface the cells electronically, maybe reading electronically what cells are doing or even sending signals into cells and instructing them to do things,” El-Naggar said.

“We are talking about building hybrid cells that combine the best of biology and 21st-century physics, making biological batteries, producing fuels and turning cells into living foundries that build electronics. We are also talking about using our understanding of electron transport to disrupt harmful microbes that cause disease,” he explained.

“That would be very difficult to do if it wasn’t for the substantial new funding which comes with recognition like this, so I’m pretty psyched about it.”

El-Naggar has already received considerable recognition for his groundbreaking research. In 2010, he received a Department of Defense Young Investigator Program Award from the Air Force Office of Scientific Research. In 2012, he was named one of Popular Science’s “Brilliant 10,” the magazine’s annual honor roll of the 10 most promising young scientists whose innovations will change the world. He also received the USC Dornsife 2013 Raubenheimer Award for Outstanding Junior Faculty Member.

He said USC’s emphasis on facilitating interdisciplinary collaboration has enabled him to draw from the toolboxes of nanoscience, condensed matter physics, electrochemistry and environmental microbiology.

“This may be unusual for a physics lab, but my collaborators are in chemistry, they’re in biology, they’re in electrical engineering, they’re in earth sciences. So even though the recognition comes to me, it’s a program we have built at USC that involves many, many people,” El-Naggar said.

“My research probably couldn’t be done in many other places. There is something unique about the environment we’ve created here at USC Dornsife, especially our approach to interdisciplinary work,” he added. “It’s pretty special.”

USC Dornsife’s Mark Thompson, a leader in organic LED displays and photovoltaic technologies, has been elected by his peers to the National Academy of Engineering.

New USC Marshall research shows that, despite assumptions otherwise, Gen Zs and millennials enjoy browsing the aisles and testing the freshness of their fruit.

Former Govs. Arnold Schwarzenegger and Gray Davis, L.A. Mayor Eric Garcetti and Department of Housing and Urban Development Secretary Ben Carson were among the federal, state and local leaders to converge at the USC gathering.