A team of paleontologists affiliated with USC and the Natural History Museum of Los Angeles County has determined that birds were capable of modern flight patterns much earlier than previously suspected — at least 60 million years before T. rex stalked the land.

The new findings have added a layer of understanding to the evolution of birds from dinosaurs, as researchers explore how early birds took flight.

A study published online by PeerJ on Jan. 2 detailed the examination of a startlingly complete and pristine specimen of an ancient, dinosaur-era bird: Hongshanornis longicresta, which flapped throughout what is now China roughly 125 million years ago during the early Cretaceous Period. 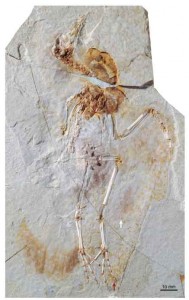 The most recently discovered fossil of Hongshanornis longcresta is so complete that details of the feathers can be clearly seen and studied, providing scientists additional clues about how the bird flew. (Photo/courtesy of Luis Chiappe)

This particular specimen, discovered a few years ago in rocks from northeastern China, is the latest example of the unexpected diversity of primitive birds that have been unearthed from that part of the world.

“Exceptionally well-preserved specimens like this one give us a wealth of information about the early evolution of birds,” said Luis Chiappe, lead investigator of the research team; curator and director of the Dinosaur Institute at the Natural History Museum; and adjunct professor at the USC Dornsife College of Letters, Arts and Sciences. “These unique fossils hold the clues for understanding how living birds became the fascinating animals they are.”

Roughly 90 percent of the skeleton is complete, with wings and tail so finely preserved that the outlines of feathers and what may be dark color bands on the tail can still be seen. That high level of preservation — particularly around the wings and tail — has allowed the team to perform an aerodynamic analysis of the bird, revealing how it likely flew.

Michael Habib, assistant professor of research at the Keck School of Medicine of USC, analyzed the shape of the wings and tail and determined that the bird “flitted about,” bouncing through the air with bursts of flapping.

The flying style is far closer to that found in modern birds than what was supposed of ancient flyers — which have been thought to rely more on gliding due to a lack of enough muscle mass in flying appendages to achieve flapping bursts.

“This isn’t a mode of flight we expected from Cretaceous birds,” Habib said, adding that its small size and overall shape are comparable to that of modern birds. “It was pretty much a Cretaceous starling with a larger tail like a mockingbird.”

Transported to the modern world, it wouldn’t look like anything special to the casual observer, until a closer examination revealed claws at the end of the bird’s wings and tiny teeth in its beak.

Reconstruction of flying styles among ancient birds is a relatively new pursuit by scientists, with a better understanding of aerodynamics coupled with better-preserved fossils allowing them to explore new questions about long-extinct species.