Two human trafficking victims who endured abuse, forced labor and exploitation in the United States have secured legal status thanks to USC’s International Human Rights Clinic (IHRC), which fought and won their cases.

For the past year, USC Gould School of Law clinical students worked in partnership with the Coalition to Abolish Slavery and Trafficking to gain legal residency for Joey from the Philippines and Leticia from Mexico. 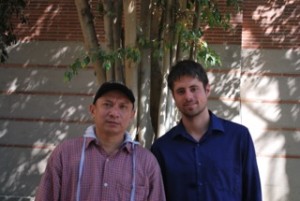 Joel Frost-Tift and Michelle Shaffie represented Joey, who was recruited to work as a hotel housekeeper, but was assigned to a convalescent facility caring for the elderly and the disabled. He often was paid less than $3 an hour and worked seven days a week with no breaks. Joey’s work visa was never renewed, as promised, and he was threatened with deportation.

Rosemary Dipietrantonio represented, Leticia who was trafficked into the United States under forced labor and later became a victim of domestic violence. Leticia was forced to work in a bar seven days a week, and most of her wages were taken by her traffickers.

Leticia, who was threatened daily, ran away from her traffickers with the help of a man who later violently abused her on multiple occasions over several years. Under the guidance of Professor Hannah Garry, director of the IHRC, the students navigated the complicated legal process to attain proper visas for Joey and Leticia.

“I never thought this day would come,” Leticia said. “I am ecstatic and so grateful to USC law for their help.”

The law students spent months crafting declarations, filling out necessary paperwork and collecting the supporting documents for the applications.

They also helped their clients acquire services. For example, they helped set up medical appointments to examine physical and mental injuries that both clients sustained due to their trafficking.

Even with a strong legal education, navigating the process to attain such visas is complicated, Shaffie said.

“It requires a lot of paperwork and a lot of attention to detail,” she noted. “We used our knowledge of human rights law and immigration law to be Joey’s guides through the process.”

Frost-Tift said the experience armed him with skills that transcend the classroom experience.

“The classroom can teach you the substantive aspects of the law, but it can’t teach you how to build a relationship of trust with a client, especially one coming from another culture,” he explained. “It also doesn’t really teach you how to adjust your strategy when circumstances change or new information becomes available. Working on this case helped cement my interest in international human rights and made me realize how important it is to focus on a cause that I believe in.”

Shaffie said the clinical experience is an example of how a legal education can truly help people.

“That’s an important lesson to carry on into our legal careers. We learned to look at our clients holistically — not just as a person on paper, but as a human being.”

Dipietrantonio said she learned that trust is crucial in a client-attorney relationship. “Working with Leticia has strengthened me in many ways and has given me insight into what it really means to be a great attorney.”