During an extended stay with the Moso, a small ethnic group in China’s Yunnan and Sichuan provinces, Joseph Rock carefully detailed his observations for an early issue of National Geographic magazine. The year was 1929.

“Here people live and die without the slightest knowledge of the outside world,” the traveler and botanist wrote. “How oppressive to be buried alive in these vast canyon systems! Or are they happier for it?”

Eighty-five years later, the outside world has finally begun to infiltrate this quiet corner of civilization. What this means for the Moso is that they are the subject of a documentary currently in production, funded through a National Geographic Young Explorers grant secured by director Ricky Qi.

Ankur Poseria ’09, who earned his bachelor’s degree in international relations at the USC Dornsife College of Letters, Arts and Sciences, is executive producer on the film, which has the working title Under One Roof. The crew includes Qi; cinematographer Daniel Zhao ’09, a graduate of the USC School of Cinematic Arts; and producers Michael Tang and Nancy Wu MA ’09, a graduate of the USC Annenberg School for Communication and Journalism. Poseria, Qi and Zhao traveled to the Himalayan foothills for three months in 2013 to film interviews with Moso villagers. 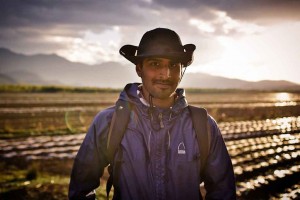 Ankur Poseria, who earned his bachelor’s degree in international relations at USC Dornsife, is executive producer of the tentatively titled documentary Under One Roof.

The team arrived in Beijing last March, traveled cross-country and eventually reached the Tibetan Plateau. Joined by sociocultural anthropologist and Fulbright scholar Colleen O’Connor, the explorers spent most of their time staying with local residents in Lige (pronounced “lee-guh”), a small village nestled at the foot of Gemu Mountain on the shore of snow trout-filled Lugu Lake.

The team had to gain the trust of the Moso people, who number approximately 40,000.

“We would go out every day, talking to locals, getting involved in things that they were doing,” Poseria said. “Coming into the project, we brought a lot of production gear with us. But what we were finding is that when we sat people down for an interview, threw up lights and pointed multiple cameras and microphones at them, they became uncomfortable and it was hard to connect.

“Finally we decided to just use the Canon EOS C300 — a versatile, cinematic-grade handheld camera — and go out and talk to people. And that’s when their world really opened up to us,” he explained. “That’s when we started to hear about the gambling and alcoholism behind closed doors, personal relationships and how they were playing out, opinions on the rest of China and if they had desires for anything modern, whether communication or more money. That was a huge breakthrough.”

The team captured more than 20 interviews on film, representing a cross-section of Moso residents from around the lake, and are weaving the stories into a series of interconnected vignettes. Through the interviews, it became clear that many traditional aspects of Moso culture are receding due to the influence of modern culture and the rise of tourism.

In the mid-’90s, the Lugu Lake Development Bureau surveyed the lake and deemed it a prime location for developing tourism. Ten years ago a highway was paved, tourists began to arrive and the long-insulated Moso villagers came face to face with the modern world. According to Qi, this has brought improvements in communication, sanitation, nutrition and ease of life for many, but it has also brought a newfound concern for money and an ideology that favors personal gain over communal growth.

In terms of the language barrier, Poseria had three years of Mandarin Chinese language study under his belt from his USC Dornsife days. Qi and Zhao speak the language fluently.

“We built genuine friendships with many of the villagers in Lige, and this eventually led to candid and powerful interviews seldom given to outsiders,” Qi said.

“In fact, we had the honor of being invited to witness and film the entire life cycle in Moso tradition, something I don’t think any other professional filmmaker in the region has done so far,” Poseria added.

Among the subjects interviewed are a former lama who gave up a life of religious solitude and now operates the largest inn and barbeque in Lige, an entrepreneurial Moso woman who became the first female village chief in the history of her people and a Han Chinese woman who abandoned a life of comfort in the city to live deep in the mountains with the Moso man she loves.

One unique aspect of the matriarchal Moso culture is the practice of the “walking marriage.” In this system, a woman may invite a man to join her in her hut for a “sweet night,” but he is obliged to depart by sunrise. There is no binding marriage contract, and if a child is born, it is raised solely by the woman’s family.

However, this tradition has also become a cornerstone of the tourism industry’s strategy to lure a certain kind of visitor to the area by sensationalizing the practice. This is particularly evident in Moso dance shows, where the tradition is the centerpiece of sensual choreography.

Under One Roof has about a year of filming left to allow the team to finish a few storylines and cover several of the region’s big festivals. 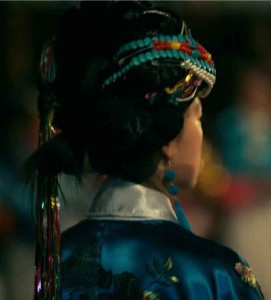 A young Moso dancer participates in a cultural performance for tourists. (Photo/Ankur Poseria)

Poseria loves photography, which he indulged in during his travels in China. The Ohio native also participated in the 2008 Olympic Games in Beijing. A swimmer, he competed in the 100-meter butterfly event.

He recalled some of his formative experiences at USC Dornsife’s School of International Relations (IR).

“In IR, we constantly analyzed the media’s portrayal of international politics, culture and news. I considered going into diplomacy or working in public service or the U.S. Department of State, but the more I learned about it, the more I wanted to be involved with the media side of the conversation,” Poseria said. “That’s essentially when I made the decision to go into international filmmaking.”

He cited Doug Becker, assistant professor (teaching) of international relations, among the teachers who most influenced him. Becker, he said, has extensive knowledge of international policy and film. In his classes, Poseria learned about how nongovernmentals and the United Nations were being portrayed in the media and what was actually happening behind the curtains.

“Doug really taught me about analysis and digging a little deeper below the surface. I learned to connect the dots.”

These are lessons being put to use now as Poseria works to understand and represent the Moso people through their own words.

For graduate Elyse Pollack, there’s nothing better than being a Trojan

A secluded society shares its secrets with filmmakers