Sometimes the USC medical student pitches his tent in the High Sierra; sometimes he pitches it on Skid Row in Los Angeles.

He’s transformed his experiences — from hiking along the 2,663-mile Pacific Crest Trail to living on Skid Row — into a passion for preventive medicine and serving the urban poor.

Arastu decided not to wait until he finished medical school to make a difference in the community. Through his program, “Health, Yoga and the Great Outdoors,” he led 17 teenagers from Hawthorne into the mountains, where they camped for a week.

“You take kids into the wilderness, and they come out stronger, more driven, with greater confidence and ability to work as a team, to be self-sufficient,” Arastu said.

Several of these students struggled with childhood obesity, substance abuse, depression and unstable families. Arastu admitted they were wary to enter the mountains, but as they departed, “everyone in the van was in tears about having to leave.” 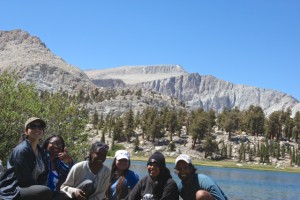 “Health, Yoga and the Great Outdoors” promotes health through a daily regimen of hikes, yoga and meal preparation. As a medical study and aspiring pediatrician, Arastu recognized the need to take preemptive action, especially for these young people, who, he said, are affected by “a lack of green space and a tremendous amount of stress in their day-to-day lives.”

He added: “It gets disconcerting in med school when you see a lot of the reasons that kids in our city are in the hospital. A lot of it is preventable, especially in this country.”

Arastu developed his wilderness program under the guidance of Marc Weigensberg, associate professor of clinical pediatrics at the Keck School of Medicine of USC, and was awarded the Albert Schweitzer Fellowship to fund it.

His contact with fellow campers didn’t end with the van trip back to Los Angeles. Every two months, they meet as a group and attend yoga and council sessions.

“Seeing them a few months after and seeing how they visibly looked healthier, are active and happy, and doing better in school, made me pretty stoked,” he said.

The link between pristine wilderness and the gritty streets of L.A. might not seem obvious, but as Arastu told his story in a 2012 TEDxUSC talk, it became clear.

While backpacking on the Pacific Crest Trail, he took a temporary detour to surprise his girlfriend at Los Angeles International Airport. Unfortunately his appearance — dirty clothes, a “monstrosity” of a beard and his decision to attract her attention with birdcalls — instead attracted the attention of Homeland Security.

“So they took me and they handcuffed me, and they tied me to a chair,” Arastu explained in his TEDx talk. He was eventually released, and on his way back to USC, he took a detour to Skid Row. There a stranger approached, brought him a drink and talked with him for hours.

Arastu left L.A. to finish the Pacific Crest Trail, but when he returned to medical school, he found himself drawn back to Skid Row by the people he met and their stories. He shared tents with them, hosted campfires and found parallels between his connection to the outdoors and to this urban wilderness.

For Arastu, it all ties together — medicine and the wilderness, the health problems of the urban poor and the potential of preventive medicine.

In the meantime, he’ll keep traveling to a school in Hawthorne to talk to 17 teenagers about the camping experiences they shared.