USC Professor Stacy Smith and a team of researchers presented the results of their latest filmmaking study at the 2014 Sundance Film Festival on Jan. 20.

The work, commissioned by the Sundance Institute and Women in Film Los Angeles, assessed the gender of filmmakers across 82 films screened at last year’s festival and found that in U.S. dramatic competition, 50 percent of directors were women. In comparison, just 1.9 percent of the directors of the 100 top-grossing films of 2013 were female (two out of 108 directors).

The study also found when writers, directors and producers participate in the Sundance Institute’s lab programs, women flourish and complete their films at rates nearly equal to their male counterparts.

“Our findings suggest that lab support levels the gender playing field and that interest in filmmaking is high among females,” said Smith, lead researcher and USC Annenberg School for Communication and Journalism professor. “These findings also suggest that the difficulties seem to begin when female filmmakers confront commercial stakeholders.”

The research documented the gender distribution of filmmakers participating in Sundance Institute Feature Film Program (FFP) and Documentary Film Program (DFP) Labs between 2002 and 2013 to determine how many emerging female filmmakers receive critical artistic support as part of their filmmaking background and how this may affect their careers and the pipeline overall. 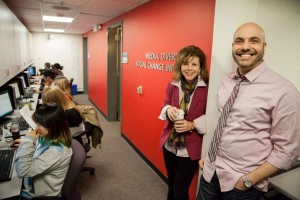 “The qualitative analysis indicates that when industry leaders think director, they think male,” said Katherine Pieper, one of the study authors. “Implicit biases like this are consistent with research on gender and leadership and may narrow opportunities for women behind the camera.”

The study was conducted by Smith, along with Pieper and Marc Choueiti at USC Annenberg. Find related info graphics here. For additional research by Smith and the Media, Diversity, and Social Change Initiative, click here.